According to a new report from the research firm Berg Insight, 40 percent of all gas customers in Europe will have smart gas meters by 2020.

At the end of 2014, there were 2.5 million smart gas meters in the EU28+2 area, corresponding to a penetration rate of around 2 percent. By 2020, the installed base is projected to reach 49.0 million units. The increase will mainly be driven by nationwide rollouts in France, Italy, the Netherlands and the UK. In early 2015, the Netherlands will become the first European country to reach 1 million units installed as the Dutch utilities start the mass-deployment of smart meters. At the end of the year, Berg Insight also expects that massive installations will get underway in Italy and France. Earlier this year, the French national gas distribution network operator GrDF placed orders for a total of 11 million smart gas meters that will be deployed until 2020. GrDF and several leading gas network operators in Italy intend to use 169 MHz radio technology as the communication platform for their solutions, while smart electricity meters will be used as local communication hubs in the UK and the Netherlands. 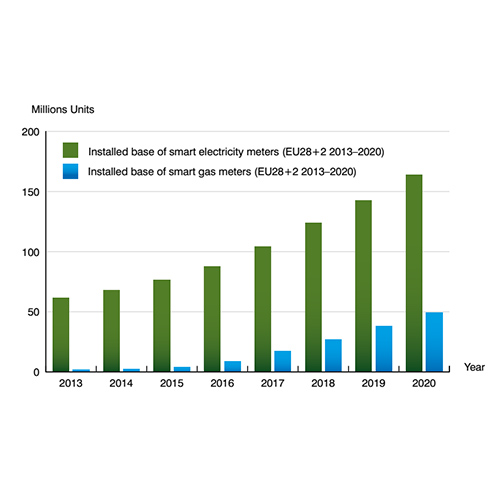 While the smart gas meter rollouts are largely proceeding according to plan in the countries mentioned, the UK is facing a more difficult situation. Following the announcement that the country’s centralised data and communications system will not become operational before the end of 2016, Berg Insight expects that the mass-rollout of smart meters will not begin before 2017. As a consequence of the delay, the official target that the rollout should be completed by 2020 seems unattainable.

“We are fully convinced that the UK smart metering project will eventually come to its conclusion, but the multitude of challenges arising from such a complex undertaking require considerable time to resolve. If there is one thing that can be learned from a decade of smart metering projects in Europe, it is that they get delayed.”