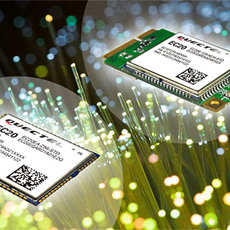 As an expert on cellular M2M modules, Quectel expands its product portfolio to include the LTE modules¹.

Quectel is expanding its LTE connectivity to the rapidly rolled out 4G industrial sector with multi-mode EC20 and EC20 Mini PCIe series modules. Featuring in unified form factor and cost-effective design, the new LTE modules are provided to be fallback compatible with HSPA and GPRS/EDGE network.

¹ LTE has the potential to become like “super-Wi-Fi” in that it is fast becoming universally available to connect millions of devices to the internet that have never been connected before. LTE is much more efficient than predecessor technologies, enabling operators to reduce the cost of delivering data services below that of 3G and 2G. Since spectrum is an operator’s most precious resource, this efficiency is driving operators to aggressively deploy LTE networks so they can move subscribers off their 2G and 3G networks and on to LTE as quickly as possible. USA, Japan, and Korea, have already achieved nearly 100 percent LTE coverage. This wide LTE coverage moves the industry beyond smart phones and creates a new paradigm for the creation of new machine-to-machine and consumer electronics devices.