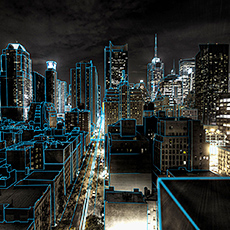 Nokia is introducing the 7705 SAR-Hm, a purpose-built, feature-rich LTE/3G wireless router aimed at modernizing distribution networks for utilities, but with clear applications for other high growth vertical markets, like Smart Cities.

The newest addition to the Nokia Service Routing portfolio merges IP/MPLS and LTE/3G technologies to provide utilities state-of-the-art wireless connectivity for grid devices located deep in a highly scalable distribution network. This allows for promising new smart grid applications, including distribution automation, advanced metering, and integration of renewable energy sources, and lays the groundwork to support an anticipated massive increase in field devices with the Internet of Things (IoT).

Many power utilities currently use narrowband or proprietary wireless solutions to connect their field devices to each other and the control center. Most remote devices have no connectivity at all. Without the ability to scale and manage the network, remote monitoring and control of devices is challenging, costly and extremely difficult to operate and deploy. Nokia has applied its experience in deploying secure IP/MPLS networks and LTE/3G to extend the reach of utilities’ networks with this solution. Network operators, both public and private, will now have high capacity connectivity in their power distribution grids and directly into field devices, as well as the highest levels of reliability, security and scalability for mission-critical applications and services.

As Smart Grids are deployed, utilities will face a huge proliferation in the number of field devices they need to connect and manage. This includes integrating renewable energy resources, such as solar panels and wind farms, which are putting new demands on the electrical distribution system. Shifting loads and fluctuating generation from renewables will require real-time adjustment without operator intervention. Because the 7750 SAR-Hm distributes intelligence wirelessly over the IP/MPLS transport network, devices in the field will now be able to communicate and make decisions without human intervention as well as have greater flexibility, reliability and scale. This is critical for a more responsive grid today, and support for the expected increase in IoT devices in the future.

“Adding LTE and other wireless capabilities to the proven 7705 platform provides compelling new choices for utilities looking to extend the reach of their connectivity to modernize grid operations.”

Sri Reddy, head of the IP Routing and Packet Core Business Unit for Nokia, said:
“Power utilities worldwide are in the midst of a significant transformation as they gear up to meet new market forces, green environmental regulations and disruptive renewable energy technologies. Grid reliability, power quality and automation are all key areas that will require improved field area networks. We are excited to offer our utility customers wireless options for extending the proven, secure and reliable IP/MPLS services of our Service Router portfolio. This will not only allow them to modernize their field area operations with more automation and monitoring for improved grid reliability and power quality, it will position them well to maximize tomorrow’s opportunities.”

Ideal for power utilities, the Nokia 7705 SAR-Hm is also available for other industry sectors requiring wireless connectivity of IP/MPLS services for field operations, including oil and gas, mining, public safety, government, transportation and aviation. This demonstrates Nokia’s continued investment in its IP/MPLS routing portfolio, and is in keeping with the company’s strategy to broaden its footprint beyond service providers, to vertical markets needing high-performing, reliable and secure networks.
Source: http://globenewswire.com