An article by Aris Xylouris, Analyst at Analysys Mason.

The number of LPWA deployments is continuing to increase, with 85 new commercial networks announced in 2016.

Network technologies are fragmented – at least eight different LPWA technologies are in use worldwide. The NB-IoT standard accounts for more announcements than any of the competing options. This article discusses recent developments in LPWA network initiatives, quantifies the popularity of different LPWA protocols in different regions worldwide, and considers the effect of the recent standardisation of NB-IoT on operators’ LPWA strategies. 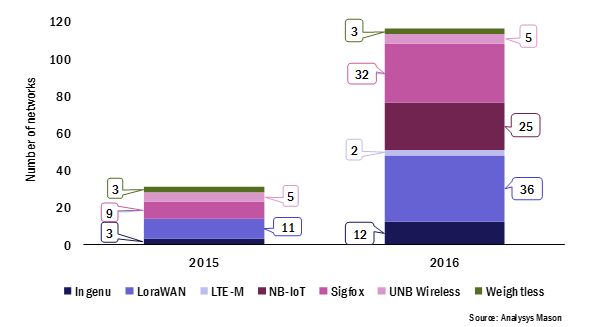 Activity in the developed Asia–Pacific region is the main driver of this regional shift, representing 30% of all new network initiatives in 2016, up from 4% in 2015. Operator-led initiatives are particularly strong in Japan, Singapore and South Korea. Most of these network initiatives use NB-IoT technology – for example, M1 in Singapore and KT in South Korea have opted for it – but SoftBank (Japan) has opted for LoRa. Start-ups using LoRa and Sigfox technology are also active in the region, particularly in Australia and New Zealand where start-ups launched nine different LPWA initiatives.

While some LPWA technologies are having success across different geographies, we are not seeing any region-specific adoption trends. For example, LoRa networks exist in large developed markets (for example, Japan) and small less-developed markets (for example, Estonia). Likewise, Sigfox network deployments do not have any obvious trends. The inroads that some technology providers have made in specific regions appear to be mainly due to proximity and knowledge of the local market, such as Ingenu in the USA or Sigfox in Europe, rather than other factors such as price or capabilities. The spread of LPWA networks only indicates that countries with strong industrial bases and populations with high levels of disposable income, and hence more potential IoT applications, are the early adopters and prime candidates for LPWA network roll-outs. 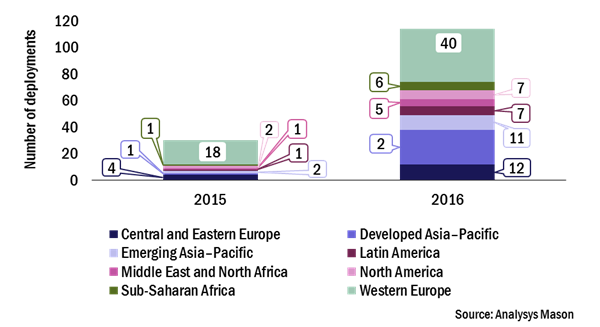 Vodafone’s network announcements account for a large number of these initiatives, but even when discounting these, a pattern of operators increasingly opting for NB-IoT emerges: 8 new operator-led NB-IoT initiatives took place in 2016.

The number of LPWA deployments increased significantly in 2016, and we can expect more announcements to be made before Mobile World Congress (MWC) 2017. It is likely that the launch of the first real commercial deployment of an NB-IoT network will be among the announcements at MWC 2017.

Previous : The Internet of the Seas Sets Sail
Next : PTC and Deloitte Announce Plans to Accelerate IoT Adoption and Innovation for Businesses