As part as its M2M Research Series, Berg Insight has just released a report on the Smart Metering Market in Western Europe.

Smart grid is one of the latest buzzwords in the energy sector and has become a catch-phrase for politicians, academics and industry leaders alike. The vision is to exploit the latest technology to address the immense challenge of securing the energy supply in the 21st century. The concept of smart grids is at times put forward as a revolutionary solution to a wide array of problems, ranging from the West’s dependency on Middle Eastern oil to global warming. A more realistic expectation is however that smart grid technology will contribute to improved efficiency and reliability in energy distribution and better optimisation in allocation of resources and utilisation of assets.

Smart metering is widely regarded as the cornerstone for future smart grids. In the history of metering technology, smart metering represents the third stage in a chain of developments spanning more than 100 years. Manually read meters have been around since the advent of the utility industry in the late 19th century. Over the last three decades, automated meter reading (AMR) based on one-way or two-way communication has evolved. Smart metering broadens the scope of AMR beyond just meter readings with additional features enabled by two-way data communication. A smart metering solution generally delivers a range of applications using an infrastructure comprising networked meters, communication networks and data collection and management systems.

Smart electricity meters are being introduced all over the developed world. Europe had an early start in the 2000s when Enel completed the first nationwide rollout of smart meters to more than 30 million customers in Italy. Later deployments followed in the Nordic countries and at the beginning of the 2010s, Spain, France and the UK are assuming the positions as the most active markets. Berg Insight forecasts that the installed base of smart electricity meters in EU23+2 will grow at a compound annual growth rate of 17.9 percent between 2009 and 2015 to reach 111.4 million units at the end of the period. Annual shipments of smart electricy meters are anticipated to exceed 20 million units in the mid-2010s.

The adoption of smart metering in Europe is to a large extent driven by regulations. A majority of the countries in Western Europe have adopted policies of regulation-driven introduction of smart meters, which is also supported by EU legislation such as the 3rd Energy Package. Sweden was first, followed by the Netherlands, Ireland, Norway, France, Italy, Spain, the UK and Finland. In addition there are informal commitments to smart meters in Portugal and Malta through projects launched by government-controlled national utilities. Germany on the other hand has only implemented some weaker regulatory drivers and the federal government has declared that it has no intentions to push for a quick nationwide rollout.

Iberia will become the next focal point for smart metering in Europe. Following a build-up phase in 2010, massive installations will take off in Spain during 2011, as the two leading market players Endesa and Iberdrola go ahead with full-scale rollouts. Gas Natural Fenosa is expected to follow close behind, potentially deploying smart metering solutions for both electricity and gas customers. Furthermore EDP plans a nationwide rollout in Portugal that can be coordinated with the mandatory deployment by its distribution network subsidiary in Spain. Berg Insight forecasts that annual shipments of smart electricity meters in Iberia will peak at around 6 million units per year during 2014–2015 before the market gradually slows down in the final years before the installation deadline in 2018. 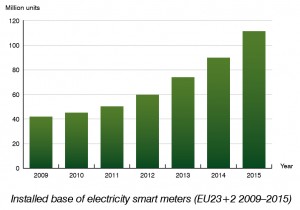 France and the UK became active markets in 2010 as ERDF and British Gas entered the initial phases of their smart meter installation programmes. ERDF plans to start with a massive nationwide rollout from 2012 and will need to deploy around 6 million units per year between 2014 and 2017 in order to fulfil the regulatory obligations that will take effect in 2018. The UK market is anticipated to follow a slower more protracted trajectory towards full penetration in 2020. There is a good possibility that other players will follow the example of British Gas and exclusively install smart or “smart-ready” electricity meters in the next few years. But since the full technical specifications have not yet been agreed, there will probably not be any wholesale replacement schemes in the immediate future.