“Talking” cars may soon be a reality – even without the need for human-like facial features, claim researchers.

Scientists from the University of Bologna in Italy have developed software that lets cars “communicate” with one another on the road. Similar technology had been used before but this time, said the team, cars would be able to “know” what had happened kilometres ahead. Tests suggest it could reduce motorway pile-ups by 40%. The reduction in accidents emerged during computer simulations of the safety system which were detailed in a paper published in the journal Computer Networks.

Road tests of the software are imminent and will be carried out in August 2011 on the streets and motorways of Los Angeles in conjunction with car maker Toyota. Although telematics, which unites telecommunications and informatics in cars, has been used for some time, the Italian research adds one more player. It unites telematics with the notion of the Internet of Things in which everyday objects have a presence online so they can be communciated with. The ultimate aim is to connect all cars on the road through wi-fi – either by installing a wi-fi-enabled sensor into a car, or by downloading software on to a smartphone.

Team leader Professor Marco Roccetti told BBC News that the study could have a major impact on society – particularly “in terms of human lives and societal costs”.

Team member Professor Alessandro Amoroso explained that the system the scientists had developed was different from conventional telematics that sees a radar-type mechanism detect an obstacle on the road in front of a car, which then brakes to avoid a crash.

“By letting cars ‘talk’ to each other, we can see what happens kilometres ahead – whereas current technology, instead, allows cars to perceive an obstacle only when it is physically in front of them,” he said.

The “talking” is done via acceleration sensors built into cars that trigger an alarm message in abnormal conditions such as when a vehicle is involved in a crash. When a car in an accident experiences a sudden change in acceleration, this change would be captured by the sensor and alert cars and drivers approaching the same spot. This alarm could spread down the chain of vehicles in a relay so they could safely stop a long way before they reach the accident scene.

“We have developed an optimal algorithm for multi-lane, strip-shaped portions of roads – such as highways,” said Professor Roccetti.

Professor Marfia said the system could work two different ways. One would see all cars equipped with a device running the alarm software, and integrated directly into the dashboard or in the sat-nav. The cost of integrating such a device would be about £25 per car, he said.

“Otherwise, our application could also run on wi-fi-enabled smartphones,” he added.

One problem might be that if a car involved in an accident starts communicating with every single vehicle behind it, and they in turn relay it to those following them, the system could become clogged with messages. 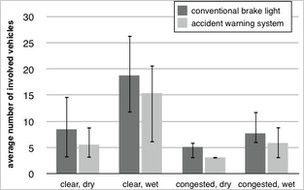 The technology could reduce motorway pile-ups by 40%

To stop the data jam, the team decided on a scheme that selectively sends a message only to those cars which in turn are able to send the signal as far as possible. This is achieved by having all the cars constantly swapping data so they know who is in the best position to pass on the crash warning.

“Our app allows cars to stay in constant contact with each other,” said Professor Roccetti. “They read each other. They know the direction and speed that all the other cars are travelling, and they also know their transmitting capacity. All this information is updated every second or so, and the frequency is optimised so that it doesn’t slow the system down.”

Simulations of other schemes that simply pass the crash message to the vehicle at the limit of in-car wi-fi’s broadcast range were fraught with too many problems, said Professor Roccetti.

“The furthest car could have a truck behind it which limits its transmitting capacity, or could be fitted with a less powerful communication system than the one in front of it. Such problems are avoided if cars know who can do the best job of passing on messages.

When the signal is sent out, the car that is in the best condition knows that it has to forward the alarm signal – and so it does,” he said.

If the project is a success, it could be a step towards the notion of “smart cities” – when everything is connected and controlled by computers, from traffic lights to intelligent, driverless cars that could bring commuters to work while they relax in the back seat.