According to a new research report from Berg Insight, the number of new smart home installations in North America is on track to reach 2.3 million in 2013, an increase of 66 percent year-on-year.

The strong growth is expected to last for years to come, driving the number of new installations each year to 12.8 million by 2017. As a result, penetration of smart home systems in North American households will increase from just 3.2 percent at the end of 2013 to 16.6 percent in 2017. The European market for smart home systems is about three years behind North America in terms of penetration and market maturity. In 2012, there were 0.5 million new smart home installations in EU27+2 and installations are expected to reach 0.7 million in 2013. Berg Insight believes that the European market is on the brink of entering a strong growth phase similar to that witnessed in North America. The market is forecasted to grow at a compound annual growth rate (CAGR) of 78 percent during the next five years, reaching 8.7 million new smart home installations in 2017. The penetration of smart home systems in EU27+2 households will at the same time increase from 0.4 percent in 2012 to 5.9 percent by 2017.

Home automation technologies have been around for decades, but have up till recently been a niche segment mainly for the very affluent or extreme technophiles. The main reasons for this are that the cost of traditional whole-home automation systems has typically been in the tens of thousands of dollars, whereas the more affordable DIY systems have often had poor reliability and required a lot of technical know-how from the users. In recent years, a new breed of more affordable whole-home systems has emerged on the market, relying on smartphone apps as a primary user interface. This has enabled more user-friendly systems and price tags in the hundreds of dollars, which is making whole-home automation accessible to the vast majority of the population. 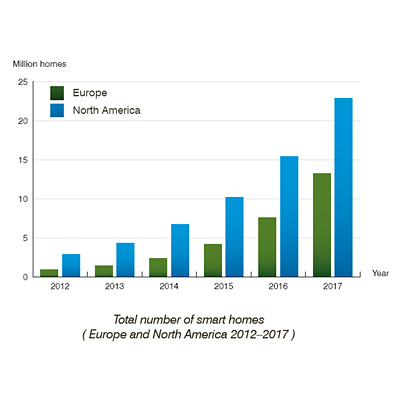 In addition to whole-home systems, smart home products that address just one functionality such as heating control or security are becoming more common. In fact, several of the most popular smart home systems on the market today are point solutions of this type. Examples include interactive home alarms from ADT, smart LED lights from Philips, multi-room audio systems from Sonos and smart thermostats from Nest.

“Smartphone apps will soon be an integral part of the user experience for a number of household products. Alarm systems and thermostats are the most popular categories today, but the trend is spreading to a wide range of products as diverse as light bulbs, home appliances, wall plugs and garage doors.”