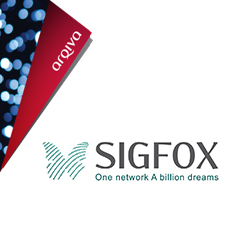 Sites go live in ten cities¹ for the Arqiva and SIGFOX Internet of Things network.

Arqiva, the communications infrastructure and media services company, and SIGFOX, a pioneer in cost-effective, energy-efficient Internet of Things (IoT) connectivity, have today launched the first sites in the rollout of their IoT network across ten of the UK’s largest cities. The network will make it simple and affordable to connect millions of “things”, helping cities and businesses to improve services, reduce costs and protect property and people.

The two companies first announced their partnership to create a dedicated UK IoT network in May 2014. They committed to connecting ten of the UK’s largest cities within 12 months, and as of December 2014 sites in each of the ten target cities have gone live, connecting them to the SIGFOX global IoT network.

“Our network is truly unlocking the promise of the Internet of Things. Together with existing connectivity, such as street-level WiFi, these cities are becoming hubs for digital innovation. A whole host of smart city and intelligent building applications can now deliver strong benefits – from smart parking and waste level monitoring through to connected smoke alarms.”

One of the first sites live in London is in the Royal Borough of Greenwich. Greenwich is rapidly establishing itself as a leader in smart city innovation and, as announced last week, will be a UK pilot for the introduction of driverless cars.
Councillor Denise Hyland, Leader of the Royal Borough of Greenwich said of the launch:
“Greenwich recognises that all the UK’s leading cities are engaged in a global competition and that cities with a clear vision for the digital economy will be in a stronger position. This kind of technology will bring benefits to all our resident’s right across the whole of our borough and in time will really help enhance how we deliver services. This technology will help cities tackle economic and social challenges and will help solves issues like traffic congestion as well as enhancing security, and making heating and lighting more efficient. We’re delighted that the Royal Borough of Greenwich is one the first areas to benefit from the Arqiva and SIGFOX network and the opportunity this provides to become a leader in this field.”

Rodolphe Baronnet-Frugès, Executive Vice President Network and Business Development at SIGFOX, commented:
“This two-way IoT network, which has been rolled out quickly and easily, eliminates the cost and energy-use barriers to widespread adoption of the Internet of Things by UK municipalities and companies. Through this project, Arqiva and the UK are presenting a clear example to governments and network operators around the world of how conveniently the SIGFOX network can help make the IoT’s many projected benefits a reality.”