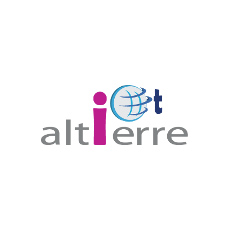 IRIS™ is the most advanced and feature rich mixed signal device for IoT applications yet to emerge from Altierre’s R&D Labs. Despite its diminutive size, IRIS™ packs a 2-way RF communication block, digital control block, onboard sensors, A/D converter, an intelligent onboard controller and a variety of interfaces to external sensors and display controllers. IRIS™ provides an extremely versatile, ultra-low power IoT controller and, in conjunction with Altierre’s secure and ultra-low power RF protocol network, enables a multitude of things to connect easily to the Internet.

Long range and non-line of sight communication ability is critical for connecting IoT sensors and displays in large buildings. A million square foot warehouse with a million sensors, for example, could be covered with just a few Altierre wireless access points running on POE (Power Over Ethernet). This could affordably and practically bring the Internet to sensors on every machine in large factories, manufacturing facilities, etc.

Altierre has already built IRIS™ into its newest portfolio of digital price tags and shipped a million tags with IRIS™ embedded inside. As a testimonial to the success of IRIS™, some deployments have as many as 65,000 IRIS™-embedded tags in a single store. Altierre is also shipping its latest ePaper signs and portfolio of sensor products powered with IRIS™, and expanding its footprint to other verticals such as manufacturing, supply chain, high-density sensor networks and cold chain.

“Operating 65,000 ultra-low power RF clients in a single building with only a couple of access points, and bi-directional data communication to each client, truly shows our ability to meet the most complex wireless challenges.”

“We have established Altierre as a leader in the Internet of Things space with real, deployable solutions, and I’m confident that our IRIS™-based products will expand our reach into a much broader range of vertical markets than was possible with our previous generation chips.”

IRIS™ allows scaling to hundreds of thousands of wireless devices in a large building, without interference from each other. The communications methodology is further designed to minimize interference with and from other wireless networks. Intelligent channel hopping methodology makes it highly secure while still maintaining ultra-low power consumption.

Altierre is poised to capitalize on the large emerging IoT opportunity. The IRIS™ chip, with its low cost, tiny form factor and long range capability, will work in conjunction with the long range, very high capacity Altierre access points to directly connect millions of devices and sensors to the Internet. Altierre has already delivered on the promise of the IoT to forward-thinking retailers, giving them competitive advantages by enabling promotional and dynamic pricing, greater operational efficiencies, shrink reduction and revenue enhancement. Altierre has also enabled IRIS™ products for state-of-the-art contextual customer-communication technologies such as BLE, NFC and RFID. Altierre is continuing to build exciting applications on top of its versatile IoT platform.