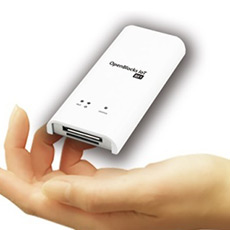 IoT Connectivity for Every Thing.

Plat’Home’s OpenBlocks® series of compact Linux micro servers have been adopted by major carriers, electronic surveillance networks, sensor networks and other enterprises in the internet telecommunications field. Ultra-compact OpenBlocks® computer appliances now permeate the industry with over 80,000 units sold to date. In recent years use of these micro servers as gateway devices for various sensor and M2M/IoT networks has become increasingly widespread.

The newly released OpenBlocks® IoT BX1G boasts the same exceptional reliability, flexibility and computing performance as previous units in the OpenBlocks® series. In addition, new wired and wireless interfaces allow it to connect with a wider variety of sensors making it ideal for use as a M2M/IoT gateway.

An IoT Gateway with On-Board 3G, Wi-Fi and Bluetooth, that is able to Collect, Process and Transmit Data from a Variety of Sensors

When implementing IoT (Internet of Things) systems a variety of sensors—monitoring items such as atmospheric temperature, air pressure, electricity, light, blood pressure or body temperature—must be connected to a network to communicate with the cloud, data center or other host system. A gateway converts different interfaces and protocols and allow these sensors to connect to the network.

Because of the great variety of interfaces used by sensors, utilizing a single gateway to connect all sensors has traditionally been difficult. The large size of the gateways has also posed problems for design layout, while spec and OS limitations have prevented free implementation of applications. Because of these issues the selection and installation of gateways has involved significant trouble and cost when constructing IoT systems.

OpenBlocks® IoT BX1G, however, helps solve these issues through the following advantages:

“This product continues and expands Plat’Home’s impressive track record in Linux Server manufacturing and we are looking forward to working closely with Plat’Home in providing easily configurable, manageable and scalable IoT solutions to customers in Japan and worldwide.”