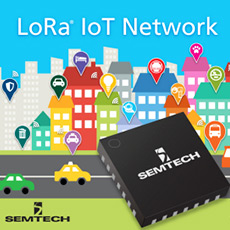 Semtech Corporation, a leading supplier of analog and mixed-signal semiconductors, today announced Orange, one of the largest mobile network operators (MNO) in the world, selected its LoRa® RF technology for a low-power, wide-area network (LPWAN) scheduled to deploy in the first quarter of 2016. Orange will use the LoRa LPWAN to connect low-power sensors to mainly “smart city” applications across France.

Orange is one of the largest operators in Europe, Middle East and Africa, operating cellular networks in 29 countries and is a major actor in machine-to-machine (M2M) cellular connectivity for Internet of Things (IoT) applications. The company will use its LoRa IoT network to connect more IoT applications and complement its existing success in cellular M2M. The two-way LoRa wireless solution offers unprecedented range and low-power connectivity to target sensor applications that need long battery lifetime and a lower price point than what can be achieved today with cellular communications.

After pilot testing the long range, wide-area network (LoRaWAN) in Grenoble, France, with more than 30 partners, Orange ultimately decided to implement the technology nationwide, as well as adopt the LoRaWAN standard, which promotes seamless interoperability between sensors and network gateways to enable IoT applications. To date, Orange is the largest MNO adopter of the LoRaWAN standard. This is a significant step for the IoT industry because large, nationwide deployments by MNOs lower the barriers of entry for IoT developers and solutions providers by reducing the cost of connectivity.

Semtech is a founding member of the LoRa Alliance, which is a fast-growing ecosystem of partners that aims to standardize LoRaWAN globally and provide an open platform to scale IoT, M2M and smart city applications. A complete ecosystem of sensors, modules and system solutions with the LoRaWAN communication protocol is already developed to ensure fast return on investment (ROI) of LPWAN network deployments.

“We are excited Orange has chosen to deploy a low-power, wide-area network based on our technology across France. This marks a significant milestone for Semtech as we move toward our goal of enabling IoT applications worldwide through standardization of LoRaWAN and the ecosystem of the LoRa Alliance.”

Tags:IoT networkLoRaLPWANOrangeSemtech
Previous : Mobile Industry Backs GSMA Embedded SIM Specification to Benefit from US$1.1 Trillion Internet of Things Opportunity
Next : ARCHOS announces the launch of PicoWAN, a collaborative network based on LoRa