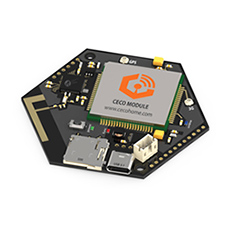 iSocket Systems introduced the prototype of the world’s first “Thread with Cellular” module for DIY electronics at the IoT Connect Show in ExCel London today.

This module uses secure cellular and Thread technologies to connect literally anything in the home via a cellular network.

iSocket Systems recently announced their new ecosystem for cellular connected homes that adopts the new Thread protocol. The CECO HOME project has already achieved recognition from companies such as Nest, Samsung, Yale, and other members of the Thread Group who declared iSocket Systems the Q3 Winners of the Innovation Enable Program in November 2015. The company has also been declared IoT HEROES 2016 in the IOT / M2M Innovation World Cup 2015/16 and shortlisted as a finalist at The WTS 2016 Awards.

The new CECO MODULE from iSocket Systems allows users to connect to virtually anything in a home or outside the home, regardless of the location or Internet availability. Built-in software and Open API are essential parts of the new ecosystem and the new module will also have embedded software and supports MQTT protocol for integration with the IBM Bluemix platform or any other MQTT servers.

“This module is supplied with built-in software to support all major features demanded in a Smart Home. You just build your own hardware solution and use smart software where we already predict most of the features you would like to see. We have extensive experience in Smart Homes and know customers’ expectations.”

iSocket Systems designed CECO MODULE in an unusual hexagonal shape with a Thread antenna onboard and connectors for external 3G and GPS antennas. CECO MODULE is not locked to work with any one operator – it is an open project for the public that will support any 3G mobile operator around the world. The module has a slot for a micro SIM card located alongside the new generation USB 3.1 Type C connector.

This module will be a part of the new CECO ecosystem where developers can build a service around the product quickly, even without knowledge of the hardware part.

The main goal of the company now is to gather a community for their Kickstarter plans and get input from the community about additional features for this module and supplementary Thread modules.