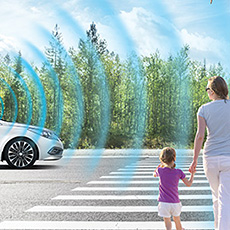 ADAS are systems found in modern vehicles designed to automate, adapt and enhance vehicle safety and driver experience. Safety features in ADAS include warnings for collision and accident avoidance which help drivers implement safeguards, and sharpen their focus on control of the vehicle.

Telit’s SL869-V2 is a subminiature multi-satellite receiver module that can be installed in vehicles, industrial, wearable and portable digital devices. It delivers a high level of stability for navigation applications by tracking GPS and GLONASS at the same time, relaying accurate and fast-refreshing positioning information.

PLK started in 2000 as an in-house venture firm as part of Hyundai Motor Company and was later spun off in 2003. It specializes in the development and production of the Advanced Driver Assistance System (ADAS) utilizing camera image sensors to recognize lanes, vehicles, light sources, traffic lights and pedestrians. PLK was the first to develop a Lane Departure Warning System (LDWS) based on color image recognition and, in 2006, became the first to line-fit it into vehicles (Hyundai Motor Company). PLK systems quickly became widely recognized for their performance and, have since 2009 been equipping 15 models around the world, including in the United States, Europe, the Middle East, China and Australia, in addition to Hyundai and KIA passenger cars.

“It is rewarding to secure the Optian project for Telit’s GNSS module. The selection process was very stringent and PLK’s choice of the SL869-V2 is a testament to the quality and performance of the product.”

“Telit GNSS modules are not only successful in the automotive sector but also in various other industries. We expect that cooperation with PLK will expand as they continue developing innovative systems and products that make driving a safer experience for motorists everywhere.”