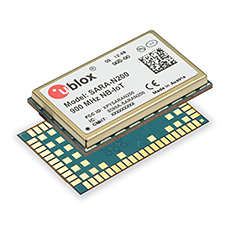 Designed for use in applications such as smart buildings and cities, utilities metering, white goods, asset tracking, and agricultural and environmental monitoring, the module will operate for between 10 and 20 years from a single-cell primary battery. Its 16 mm x 26 mm LGA form factor, using u-blox nested architecture, facilitates simple upgrades from u-blox GSM, HSPA or CDMA modules and ensures future-proof, seamless mechanical scalability across technologies.

The SARA-N2 module provides secure, private communications over licensed spectrum with guaranteed quality of service. It supports peak downlink rates of up to 227 kbps and uplink rates of up to 21 kbps. Simultaneous support for three RF bands means that the same module may be used in most geographic regions.

The benefits of NB-IoT over other cellular radio technologies include lower device complexity, ultra-low power operation and support for up to 150,000 devices per single cellular cell. Most significantly, the technology offers a 20 dB link budget improvement over GPRS to give excellent performance under poor coverage conditions such as underground or inside buildings.

Compared with unlicensed spectrum Low Power Wide Area (LPWA) solutions, NB-IoT offers greater security and freedom from interference because it uses a licensed spectrum based network. Other advantages include lower latency than mesh networks, thanks to its point-to-point topology, the ability to run it adjacent to existing 2G and LTE networks – it needs just 200 kHz of bandwidth – and a higher transmit power limit, which improves reliability and range. It also allows for robust 2 way communication which means that features such as firmware upgrade over the air are achievable. Furthermore, global roaming is possible with NB-IoT, which is not the case with localized unlicensed spectrum based technologies.

Stefano Moioli, Director Product Management Cellular at u-blox, commented:
“u-blox has been an early pioneer of NB-IoT and we’ve worked closely with companies including Vodafone, Deutsche Telekom and Huawei to complete the first successful commercial trials of pre-standard NB-IoT in smart metering and parking applications. These trials proved conclusively that NB-IoT networks operate far more efficiently than GPRS and we’re confident of the technology’s future because of the many advantages it offers over alternative approaches.”

“We’re pleased to be able to announce the world’s first fully 3GPP compliant module that will enable customers to take full advantage of this exciting technology.”

Samples of the SARA-N2 NB-IoT module are currently scheduled for Q4 2016, with full production planned for early 2017.