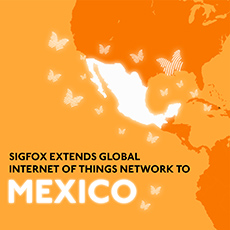 SIGFOX, the world’s leading provider of dedicated communications service for the Internet of Things (IoT), WND, the company launched to extend SIGFOX’s network across Latin America, and IotNet Mexico today announced they have launched the network’s deployment in Mexico.

Mexico City, with a population of 21 million, provides one of the world’s largest markets for smart-city applications, which Machina Research says will represent one-third of all low-power, wide-area (LPWA) connections in the country. The partners expect city-wide coverage by the end of 2016 and nationwide service availability shortly thereafter.

IotNet Mexico, the exclusive SIGFOX Network Operator (SNO) in the country, will also focus initially on applications for utilities such as remote metering for water, gas and residential electricity.

“As part of a group that is providing utility services to major Mexican companies and is deploying the first metering-as-a-service in the country, we made an extensive comparison of the available LPWA and cellular technologies and concluded SIGFOX was superior in simplicity, choice of hardware vendors and ecosystem support,” said Daniel Guevara, CEO of IotNet Mexico. “But more than that, we chose them for their disruptive business model and their versatile global ecosystem that helps SNOs and their customers quickly implement the IoT.”

SIGFOX’s rapidly growing network, which is now present in all continents, provides simple, reliable, energy-efficient and cost-effective connectivity for devices that communicate small messages to the cloud. Its dedicated solution is tailored for smart cities, smart buildings, asset tracking, remote monitoring, utility metering and multiple other applications that will make up the vast majority of IoT use cases. With a unique offer, SIGFOX enables businesses to add new services along with their products, thus creating new business models and generating additional revenues.

As SIGFOX accelerates its Latin American deployment, which started in Brazil in April, Mexico becomes the 21st country to roll out the network. With these two countries alone, SIGFOX will be able to address 53 percent of the Latin American territory and 56 percent of its population.

IotNet Mexico is partnering with WND to provide SIGFOX’s connectivity throughout Mexico. WND, founded by Chris Bataillard, an entrepreneur and active founder, investor and advisor at several telecommunications and high-tech companies, kicked off the Latin America expansion with Brazil only two months ago.

“The SIGFOX network will help unlock the promise of the Internet of Things across Mexico, because it is simple, fast and affordable to connect millions of devices that will share their data over multiple applications,” said Bataillard.

“By deploying the SIGFOX network in Mexico with IotNet Mexico, we are substantially increasing the scale of the deployments in the region to reduce even further the costs of bringing this network to cities and businesses who are committed to delivering value added IoT services in Latin America.”

“This partnership with IotNet Mexico continues our rapid network deployment in Latin America and adds another key country to our global seamless network,” said Rodolphe Baronnet-Frugès, SIGFOX executive vice president networks and operators. “With the addition of Mexico, SIGFOX and its network operator partners are currently deploying the SIGFOX network in countries totaling one billion people, with one third of this population under effective coverage today.”