The research revealed that while the majority of respondents acknowledge the business opportunity presented by the Internet of Things (“IoT”), and the growing number of IoT devices connected to their enterprise networks, their organisations lack understanding of how to properly secure them.

“The staggering growth of IoT is creating both value and risks for enterprise organisations,” said Jan Hof, International Marketing Director, ForeScout Technologies.
“While IoT is recognised by many as an opportunity to improve and streamline business processes, there are associated security risks that need to be addressed – first and foremost through visibility of devices as soon as they connect to the network. You cannot secure what you cannot see.”

Commissioned by ForeScout and conducted by a non-affiliated third party, Quocirca, the survey of 201 senior IT decision makers in the UK and German speaking regions of Germany, Austria and Switzerland (‘DACH’) assessed their organisations’ IoT security practices. Key findings from the survey include:

Bob Tarzey, Analyst and Director at Quocirca (who conducted the survey), said:

“IoT deployments already involve millions of devices in businesses across Europe. Many will have limited processing power and require low power usage. Others will have unusual operating systems and, in certain cases, the Things involved will be unknown to IT security teams when they first request network access. All of this requires tools that can manage and understand the security status of all network attached devices, without the need to install agents.” 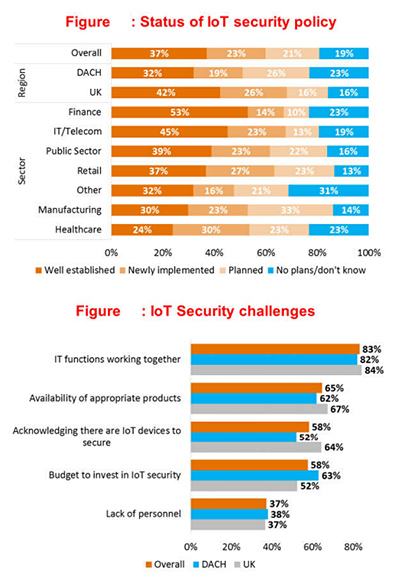 Survey Methodology
ForeScout commissioned Quocirca to conduct the “European Perceptions, Preparedness and Strategies for IoT Security” survey from August – September 2016. The survey of 201 senior IT decision makers in the UK and German speaking regions of Germany, Austria and Switzerland (‘DACH’) analysed and assessed respondents’ views on their organisation’s IoT devices, security policies, approaches and tools. The research covered a range of industry sectors and businesses with as few as 10 employees, up to large enterprises with more than 10,000 employees. The research follows on from an earlier survey carried out in the U.S. by Webtorials in March – April 2016.
Download the full European report