The IoT Trends and Situations study was conducted by Taxal over the course of 2016. Its objective was to study manufacturers’ situation, trends, enablers and inhibitors in areas of IoT.

The study consisted of in-depth, one-on-one phone interviews with over 280 companies across a range of industrial markets and geographies. The study was designed to capture both statistically relevant information as well as qualitative and subjective feedback with over 85% of those interviewed being company executives and managers.

From the study, while some observers might think IoT is still somewhat embryonic. Results show the urgency that the audience place on its proposition.
56% of interviewed companies are currently active in IoT projects that are either in-market or will be over the course of the next 12 months, and 78% will be the next 3 years.
The importance of IoT to the business was reinforced by the fact that 50% of the audience currently see the IoT as critical or very important to their company, with 35% believing it worthy of additional development investment beyond that of ‘normal’ R&D activities.

When it comes to significant benefits, 50% of the companies interviewed believe that IoT helps them to differentiate their offerings and 58% feel that it helps them better compete with others in their markets. 52% of those studied believe that IoT will allow them to develop new services for their customers, and 49% see it as a technology which helps them improve the uptime of their products.

The principle beneficiaries from the use of IoT will, from the eyes of the company, be the customer. 56% of those interviewed believe that the customer will have the most to gain from its application, but it will also prove to be of significant benefit to departments such as customer service (56%) and design and development operations (46%).

While many companies are active in developing for the IoT, or soon will be, only 30% of those studied believe that they were ‘ready and enabled’ for what’s to come. 38% of companies felt they were making progress and 32% believed there was much to do. There are many reasons behind these statistics; highlighted among these is the need to invest in infrastructure and new technology, and develop and recruit the new skills needed for the IoT era. 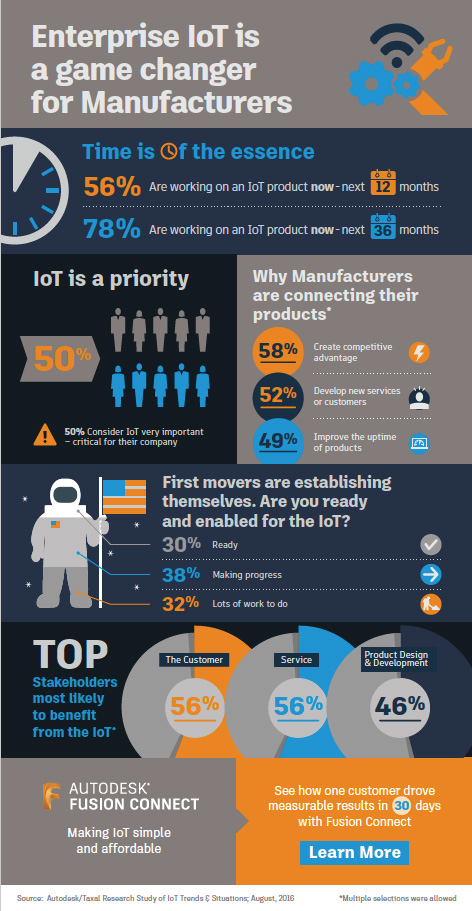