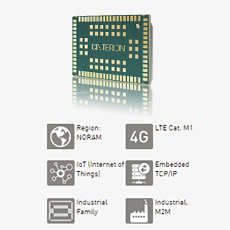 The new Cinterion® LTE Cat. M1 solution takes network efficiency and simplicity to new heights, delivering LTE for Machine-Type-Communication (MTC) and improved power savings that enables battery life of 10+ years, for some use cases. The new module is ideal for use cases not dependent on speed, but rather requiring network longevity and improved indoor coverage such as asset trackers, healthcare solutions, smart meters and industrial sensors.

The new wireless module is the first IoT solution based on a dedicated LTE Cat. M1 chipset. The low-power, wide-area (LPWA) module offers extended coverage, including improved in-building and in-ground penetration. The solution operates on the highly efficient LTE spectrum and is capable of supporting more than 10 frequency bands from a single hardware device. This eliminates the need for multiple variants providing simplified global deployment and a fast time to market. In the future, the new module will be able to run LTE NB-IoT protocols on the same hardware, giving customers a future-proof path to the latest network standards. Sharing the same footprint as existing Cinterion products, the LTE Cat. M1 solution enables easy migration from 2G and 3G devices. Development samples are available immediately before debuting on the Verizon 4G LTE Cat M1 network in early 2017, which is scheduled to achieve nationwide US coverage by the end of Q1 2017.

“Supported by all major mobile equipment, chipset and module manufacturers, LTE-M1 provides an important path forward as we move toward a universal standard for IoT communication,” said Johan Fagerberg, CEO of Berg Insight.

“The LTE market for IoT is vast and requires connectivity solutions for a range of devices, from low-power, low-bandwidth applications addressed by LTE-Cat M1, to higher performance, wider bandwidth use cases best addressed by LTE Cat 1 or Cat 3,” said Chris Schmidt, Executive Director Device Technology at Verizon. “We are pleased that Gemalto continues to deliver innovative, cost-effective solutions to meet the evolving needs of Verizon’s LTE customers by developing a Cat-M1 module for use in a variety of IoT verticals, including smart grid, agriculture, fleet, asset tracking, and smart city applications.”