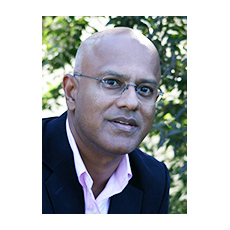 According to my records, the strength of IoT corporate initiatives witnessed over previous years weakened in 2016, somewhat in contrast to the much greater visibility of the IoT at industry events and in the marketing literature.

While the number of merger, acquisition and investment (MA&I) fell compared to 2015, as a proportion of all corporate events it increased over the prior years. About 70% of these relate to acquisitions; the remainder correspond to fundraising or investment activities.

Now that the IoT market has become a mainstream idea across the wider economy, the MA&I dynamic reveals a stronger tendency for companies to accelerate their IoT strategies by acquiring capabilities from third parties. 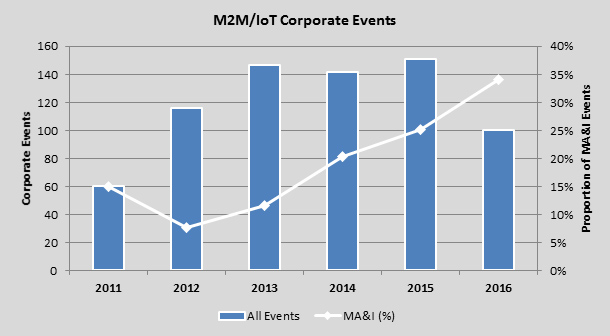 Business involved in supplying technology were the most active in MA&I, followed by IoT platform businesses and mobile network operators in a distant third place. The following illustration presents the top-most categories of all corporate initiatives across the IoT value chain. It shows technology supplier involvement in 45 instances, 31 of which involve some form of activity between two business entities. Platform service providers were the second busiest group of organizations through initiatives with technology suppliers (10 cases), mobile network operators (10 cases) and other platform businesses (7 cases). 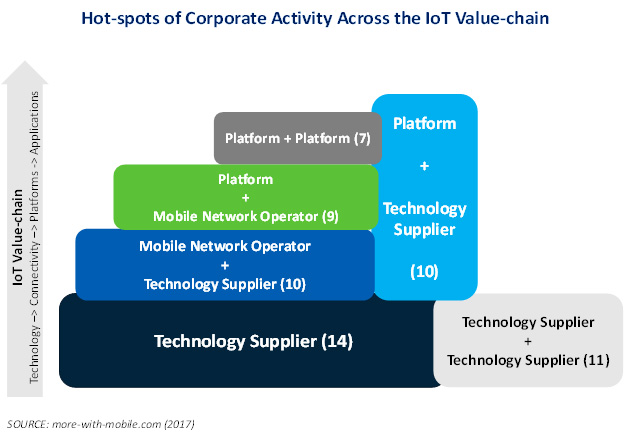 Many technology suppliers were adding IoT technology capabilities to their existing portfolios. Examples of this trend include GE’s acquisition of Meridium, an industrial software firm, and Software AG’s acquisition of Zementis to add an artificial intelligence capability to its IoT offering.

Another aspect of M&A activity involving technology suppliers concerns the build-up of segment capabilities. Here, examples include Nokia’s acquisition of Withings to enter the consumer electronics and IoT devices sector as well as Option’s acquisition of Innolumis and Lemnis Pubic Lighting.

Among mobile network operators (MNOs), Verizon stands out for its concerted strategy to build a business in the fleet management (Telogis and Fleetmatics acquisitions) and the smart city (Sensity Systems and LQD WiFi acquisitions) segments.

Mobile network operators and technology suppliers operate in segments of the IoT value chain that are most susceptible to commoditization. It should come as no surprise that they were active in embracing the IoT as a means of moving up the value chain. On 2016’s showing, however, technology suppliers were more wary of strategic threats and acted more aggressively compared to the MNOs.

Platforms are one way to get closer to new, value creation opportunities from IoT applications. Cisco’s acquisition of Jasper and the investments made by Microsoft and SAP highlight the importance of this segment to the hardware and software technology suppliers.

IoT platforms are also an enabler for IoT service offerings in the form of subscription and value-added offerings. Such prospects appeal to businesses that wish to invest in growing, addressable markets. Over the longer term, businesses will see considerably more value in IoT applications as well as complementary and derivative services such as interoperability enablers and data exchanges respectively. This trend will result in corporate initiatives beyond the boundaries of what currently constitutes the M2M/IoT market. For example, investments in scarce and reputable data sets, speech-based interpreters, virtual reality etc. could well account for the fall in the number of corporate events relative to prior years.

One implication for traditional players is to recognise that the composition of IoT applications is becoming more complex in the sense that there are more elements to combine to create a valuable IoT service. However, the addition of front-end or user-interface elements may have the advantage of improving the user experience enough to accelerate adoption, especially in the consumer segment.

Ken Figueredo consults to companies on business strategy and new market offerings in the connected devices arena. He advised the GSM Association on its Connected Living market development strategy.
His recent focus is on corporate strategy and the long-term technology roadmap for IoT as well as enterprise and telco digital transformation. Ken has worked with major mobile operators, institutional investors and equipment vendors from Asia, Europe and North America.
For more information or to subscribe to our knowledge network, please contact Ken Figueredo (ken@more-with-mobile.com) or sign-up at www.more-with-mobile.com
Previous : Sequans’ LTE Cat 1 Technology Selected by Geotab for Next Generation Vehicle Tracking Devices
Next : Hertz Connects Its Hourly Rental Vehicles with Datavenue IoT Solutions from Orange Business Services