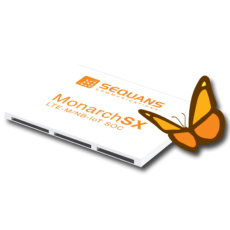 Monarch SX is designed to streamline the development of numerous types of IoT devices, including trackers, wearables, sensors, utility meters, and other smart home and city applications.

“We’ve taken our industry-leading Monarch LTE-M/NB-IoT chip platform and integrated it on a single piece of silicon with the processing power needed for some of the most popular IoT applications of today.”

“We built Monarch SX for our IoT device maker customers, understanding what they want to build and the functionality they want to incorporate in their designs,” said Karam. “Because of its high integration level, Monarch SX is ideal for the smallest of IoT devices where space is at a premium—wearables, trackers, and all types of sensors—and because of its powerful integrated processors, it’s also ideal for smart IoT devices.”

According to Chris Taylor, Strategy Analytics’ director of RF and Wireless Components:
“Monarch SX from Sequans not only incorporates a low-power-consumption applications processor suitable for IoT, but it also integrates the RF transceiver and baseband processor into one SoC; that’s at least three radio and processor chips integrated into one. This kind of integration helps M2M module and cellular IoT device makers by simplifying design and production, reducing costs and time to market. This is exactly what LTE-M and NB-IoT need to capture share in the growing cellular IoT and LPWAN markets.”

“With the introduction of the powerful, all-in-one Monarch SX, we aim to accelerate new LTE-M and NB-IoT device development and help our customers get highly differentiated IoT devices to market as quickly as possible,” said Karam.