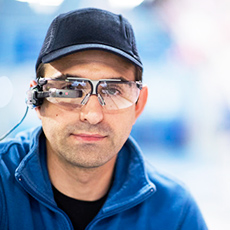 The use of “smart glasses” in an innovative application of 3D technology developed in a teaming of Airbus and Accenture has enabled greater efficiency and time savings during the outfitting of Airbus aircraft, and is being extended to flight test equipment installation on A330neo jetliners.

The success led to the deployment of smart glasses technology in mounting flight test equipment last year on the no. 2 A330neo; an experience to be repeated this November aboard the no. 3 A330neo aircraft.

“Before the arrival of smart glasses for in-cabin applications, we had to decipher complex drawings and convert imperial measurements into metric measurements in marking the position of the equipment on the cabin floor. We were surprised at how much time we saved. The operation used to require three people and three days; now it requires one single operator and six hours.”

With the use of smart glasses now well established, Airbus is looking at broader cabin outfitting opportunities in A330 final assembly line applications, eventually expanding the process to other aircraft programmes as well.

Source: www.airbus.com
Tags:smart glasseswearable technology
Previous : Mastercard Enhances Security of the Internet of Things with the Acquisition of NuData Security Inc.
Next : The installed base of cellular M2M devices in the retail industry to reach 49.2 million by 2020