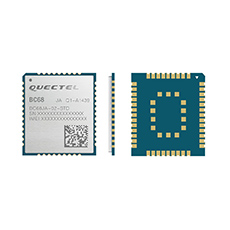 The new ultra-compact module will make its debut at Quectel Booth 2D39 during the upcoming European Utility Week scheduled 3-5 October in Amsterdam, The Netherlands.

As the world’s smallest NB-IoT module, BC68 measures only 17.7mm × 15.8mm × 2.3mm in LCC form factor, and will be very attractive for manufacturers of space constrained terminals, especially the wearables, security and portable health monitoring devices.

Footprint-compatible with Quectel GSM/GPRS M66 module in unified form factor, BC68 provides a flexible and scalable platform for existing customers to migrate from GSM/GPRS to NB-IoT network at low cost and short time-to-market.

As a key IoT player, Quectel launched LTE Cat NB1 BC95 module last year, which was among the world’s first NB-IoT modules compliant with 3GPP R13 standards. BC95 achieved big success and has been embedded in innovative IoT terminals and solutions by more than 400 companies as of late June 2017. Currently, Quectel has commenced mass production of BC95 with the monthly shipment keeping stable.

Quectel’s NB-IoT Product Manager Moore Chen said the BC68 module is an enhancement to the company’s LPWA product portfolio. He revealed that the company will launch a new NB-IoT module in the fourth quarter of 2017, which targets global market and will support a full frequency band.