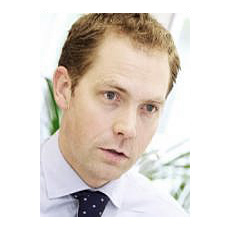 Tom Rebbeck, Research Director at Analysys Mason, comments the results of the Enterprise survey conducted by AM in February 20171.

Despite all the attention that IoT has received across multiple industry verticals, a significant percentage of enterprises have either not heard of IoT (29% of SMEs, 18% of large enterprises) or have no interest in adopting it (23% of all enterprises).1

More work is required by solutions providers to explain to enterprises what IoT is and why it should be implemented. This is especially important for smaller enterprises. This article discusses some of our enterprise survey results in more detail to highlight the significance of the market opportunity for IoT solutions providers.

It may be incorrect to assume that the take-up of IoT is being held back by competing technology standards, an uncertain business case or security concerns: enterprises would need to have explored IoT to understand any of these issues. Indeed, IoT may be restrained by a more basic problem of awareness. There is a positive message to take from this: there is still a massive, untapped market for IoT solutions providers that get their product and messaging right.

In our survey of 1600 IT and telecoms decision makers in enterprises worldwide, we asked whether they had heard of IoT and, if so, whether they had any plans to deploy IoT solutions. The results revealed that a small percentage of firms already had an operational solution: 12% of SMEs and 18% of large enterprises (see Figure 1). More striking, though, is the share of enterprises that was unaware of IoT or not interested in it: combined, this group of respondents was made up 52% of SMEs and over 40% of large enterprises.

One of the assumptions behind the large forecast numbers for IoT, including Analysys Mason’s own forecasts, is that most companies or sectors will have some use for IoT solutions. However, while this may prove to be accurate in the long term, this perception is not shared by most enterprise firms today.

Figure 1: Percentage of enterprises at each stage of IoT development, 20172 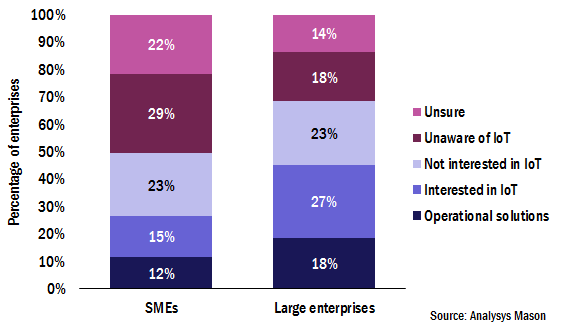 Also notable from these results is the stark difference between large and small enterprises, both in terms of the share of firms with operational solutions, as well as those that are interested in IoT (27% of large enterprises and just 15% of SMEs).

Much of this can be explained simply by size – large enterprises have more projects (of all types) than SMEs and will therefore be more likely to have an IoT project. Large enterprises may also have more resources to explore new areas and ideas such as IoT. Conversely, SMEs may not be willing or able to commit resources to IoT projects, especially if they are experimental and come with uncertain returns.

For organisations that are hoping to sell IoT solutions, these results suggest that there is an untapped opportunity to provide IoT solutions to the lower end of the market (assuming that IoT is equally applicable to small, as well as large, organisations). However, few companies have the necessary skills to sell, deploy and support IoT solutions for the majority of SMEs and there is a lack of ‘off-the-shelf’ solutions that address the needs of these organisations.

China is behind in adoption today, but may catch up quickly

Our survey has revealed significant regional variation in the levels of interest in, and adoption of, IoT solutions.

The USA has the highest levels of adoption of IoT solutions. It is likely to maintain this position as a large share of enterprises that have not yet deployed solutions are interested in doing so (20% of SMEs and 30% of large enterprises).

Western European enterprises are more likely than Chinese firms to have an operational IoT solution in place, but Chinese companies are expressing a strong interest in IoT and may well close this regional gap. In Western Europe, the difference between the results for SMEs and large enterprises is also greater than elsewhere, possibly because IoT providers are focusing most of their attention on large enterprises.

The interest in IoT suggests that Chinese providers, including mobile operators, are doing a better job of raising awareness of IoT than those in Europe.

Figure 2: Percentage of enterprises with operational IoT solutions, by country/region, 2017 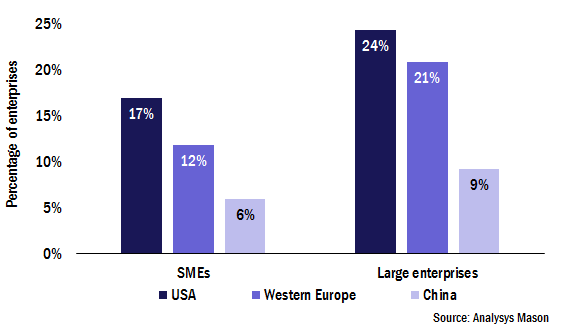 For telecoms operators, or any other provider trying to sell IoT solutions, these figures should act as another reminder that IoT is still in its very early phases. Any IoT plan will need to have long time horizons. It is also a reminder that the technical issues facing IoT – in terms of standards and security – are secondary to the more-basic issue of helping enterprises to understand the potential benefits of IoT.

The results also mean that, for a provider that gets its product and marketing right, there is a significant market that remains largely unaddressed.