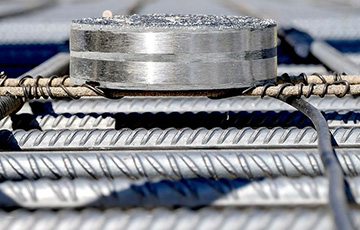 Düsseldorf Airport is one of the most important German hubs in international air traffic. In future, digital processes will play a role in successfully handling its more than 24 million passengers annually. Intact, reliable traffic routes and the construction infrastructure form the foundation of these processes.

The airport has teamed with Deutsche Telekom and its partner BS2 Sicherheitssysteme to develop a digital monitoring solution for bridges, tunnels, buildings, and other infrastructure objects made of concrete.

Bridge transmits over the IoT

The access road to the airport’s tank farm is a neuralgic point for smooth flight operations. A bridge provides the sole access route to the farm. More than 120 fuel tank trucks, carrying 30,000 liters of kerosene each, commute daily over this stretch of road between runway and container tanks. This enormous load causes material fatigue in the long term. In the future, sensors and the Internet of Things will identify impending damage, preventing bottlenecks in supplying kerosene to the aircraft. 50 sensors in the road surface and bridge copings measure temperature, humidity, and corrosion. This sensor data can help identify critical conditions or irreparable damage to the concrete structures. The renovation measures can be extensive. The data is exchanged over Deutsche Telekom’s Narrowband-IoT machinery and sensor network nearly in real time.

The transportation infrastructure is getting smart

“We have a bottleneck here at the central tank farm. The digital solution protects us against unforeseeable damage to the access road and the disruptions to tank usage that it would entail.”

Other roads around the Düsseldorf Airport are also being equipped with sensors, step by step. The installed sensors have a lifetime of up to 70 years. They can be installed quickly and easily in new construction products or retrofitted in existing concrete structures.

“Düsseldorf Airport is one of the pioneers in Germany that is using IoT technology for its road constructions at the airport,” says Ingo Hofacker, responsible for IoT business at Deutsche Telekom. “Networking of transport infrastructure is growing in importance. The new network of equipment and sensors is an ideal foundation for data transmission.”

Another place where sensors from BS2 Sicherheitssysteme are being deployed is the Köln-Ost junction, where Germany’s Federal Highway Research Institute (BASt) is testing the sensors on their Cologne test grounds, together with Deutsche Telekom’s equipment and sensor network. BS2 Sicherheitssysteme was born in hub:raum, Deutsche Telekom’s startup incubator.

Due to the special properties of the narrowband technology for the Internet of Things (Narrowband IoT), it is an enabler for the IoT. Deutsche Telekom is driving its expansion in Germany, Europe, and North America.