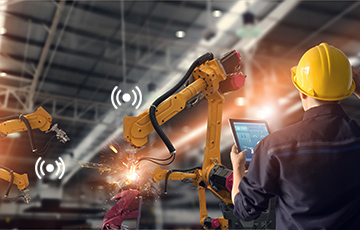 Europe’s stronger engagement in proofs of concept (POCs) and higher investment levels in 2016 have established the continent’s early lead in the industrial Internet of Things (IIoT), helping them to scale faster with three times more extensive implementations than in the U.S.

Yet, cybersecurity remains a hurdle to greater adoption in both regions. These are results of Bain & Company’s latest survey of more than 600 industrial customers of IoT offerings, detailed in a new report, Europeans Extend Their Lead in the Industrial Internet of Things.

Bain & Company first surveyed executives in Europe and the U.S. two years ago about their plans for deploying industrial use cases for the IoT. The research found that 27 percent of European executives said they planned to deploy IoT solutions compared with just 18 percent of their colleagues in the U.S. Additionally, companies in some European industries said they were devoting more of their IT budgets to the Internet of Things, particularly in automotive, buildings and industrial. In the latest survey, nearly half of executives in these industries in the U.S. said they were planning IoT deployments, on par with their European counterparts.

“The difference is that many of Europe’s industrial companies invested early and often in the Internet of Things, giving them an edge over their U.S. counterparts. Europeans also appear further along in cracking the code to unlock value from IoT solutions.”

Meanwhile, companies in the U.S. continue to struggle with implementation issues that the Europeans have mostly addressed. Bain & Company’s most recent research found that U.S. companies plan to ramp up their investments in POC through 2022. Today, about half of all IoT projects in the U.S. are at this stage, but that’s likely to increase to about 70 percent in the next four years.

Bain & Company revealed that cybersecurity is a top concern for both European and U.S. companies. According to the research, 49 percent of European CEOs said cybersecurity was the biggest barrier to IoT adoption. Industrial customers in the U.S. share this concern, but say issues that would bring IoT solutions into the mainstream of their businesses—namely, integration with other operating technology, interoperability, technical expertise and transition risk – are more pressing. U.S. executives were much more likely to cite these concerns in the 2018 survey than in 2016. These challenges limit the degree to which companies scale their POCs into daily, operational implementations of IoT technology

“Moving forward, the greatest challenge for Europe’s IoT providers is to become leaders in cybersecurity, to meet the needs of their commercial and industrial customers that remain wary due to their security concerns,” said Ann Bosche, a partner in Bain & Company’s Technology practice. “European companies must also continue to address the complex privacy and regulatory environment of the EU. Mastering these challenges could position Europeans as global leaders with a competitive advantage over their peers from other regions.”

According to Bain & Company, Europe’s lead in IoT implementation is a direct result of commercial and industrial customers allotting a higher percentage of their technology spending to IoT deployments compared with their U.S. counterparts. Funding levels have remained roughly constant in Europe over the past two years, reflecting the reality that it can take longer than originally expected to overcome implementation barriers, especially security. Discrete manufacturing represents the greatest percentage of allocation in Europe and the U.S., with process industries following closely behind.

Looking ahead at the investment plans of industrial customers, Europeans are poised to hold a narrowing lead, with more than twice as many extensive implementations in 2020 as their U.S. counterparts. Looking almost 10 years ahead—an imprecise endeavor, but one that can shed light on aspirations— the investment plans of executives in both regions could result in a more competitive position, with the U.S. expecting to see similar levels of POCs and implementations as the Europeans.

IoT providers in both regions could also speed their progress in reducing barriers by focusing their investments on fewer industries, which would allow them to develop greater expertise and deliver more comprehensive end-to-end solutions to their customers.

Partnerships with industrial vendors are especially important, as they provide specific domain knowledge, including software development, analytics and system integration. Without these partnerships, IoT vendors may continue to struggle to sell solutions that integrate smoothly with customers’ businesses and processes.

“Over the next two to three years, clear IoT winners will emerge, as the benefits of early investment kick in and their POCs scale up to operational levels,” said Oliver Straehle, who leads Bain & Company’s Advanced Manufacturing & Services practice in Europe, the Middle East and Africa. “Companies that have put off investment will lose ground to competitors that are learning how to derive value from IoT and are becoming more data-driven every day—skills that will form the basis of competition in a world of extreme automation and artificial intelligence.”