The problem of not hitting those project-sensitive industry deadlines not only affects the health and safety of staff and equipment, but can also cause a major setback to overall productivity and profitability. So, the results VW, ENEL and Budweiser achieved when they implemented a real-time location system to bring higher visibility to their logistics and production ensured that digitalization not only brought increased levels of safety to staff and equipment, but the elimination of bottlenecks also produced better results, and that meant less time wasted and more money in the bank.

The Road to Success

Volkswagen Slovakia’s plant produces five brands of car. So, having full visibility of the status, trajectory and exact location of each of its forklifts means knowing the movement of the fleet in real time and utilizing this to the full to achieve greater efficiency.

In order to gain up-to-date insights into the status of its forklifts and AG, VW Slovakia implemented Sewio’s ultra-wideband real-time location system (RTLS) into one of its 10,000 m2 halls. This means they can now leverage metrics, spaghetti diagrams and heatmaps to check that their vehicles stick to the optimal paths. Using this information, there has been a 10% reduction in overall distance traveled by the fleet through the avoidance of the bottlenecks identified. Through monitoring where forklifts were and were not driven led to a 20% expansion of the warehousing area through optimization of the existing space while avoiding any additional need for construction.

This means VW Slovakia achieved its goal to use digital innovation to achieve greater effectiveness of its industry processes. And by using intricate and accurate virtual modeling of the entire production hall, any proposed operational updates can be simulated first to help avoid any potential pitfalls after going live.

Be Safe, Be Seen

Producing green energy in 30 countries, Enel knows that placing the safety of their staff and equipment is of the highest importance. However, being able to identify the precise number of vehicles and people present at their San Giacomo hydroelectric plant at any given point is not such a straightforward task.

With two kilometers of tunnels and many internal areas, providing a safe environment to work in and easy access for emergency services are not easy. Plus, making sure restricted areas stay strictly out of bounds to unauthorized visitors helps the avoidance of additional unnecessary dangers. Restricted average vehicle speeds of 30 km/h and damp environments meant a micro-area approach had to be adopted to cover all necessary areas and transit zones. Using a combination of RGB cameras and UWB RTLS tags, Enel is able to identify vehicles and people in real time and track their movement, and even count the number of people at the facility who are not wearing tags using the cameras. This has to an 81% reduction in entry to restricted zones and an increase in the speed of access to injured persons by the emergency services. 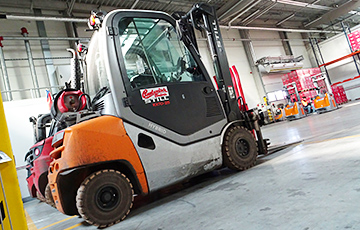 It is hard to think of the production of quality beer without the Czech Republic springing to mind. World-famous Czech Budweiser’s brewery produces 360 varieties of beer on 20,000 pallets in two sizes. These leave the plant daily on 50 lorries to 76 countries across the globe. As you can imagine, running an operation of such a scale and complexity can lead to costly human errors. But by introducing a real-time positioning system, it not only helped eliminate this, but brought the additional bonus of low maintenance costs.

15 forklifts were fitted with ultra-wideband (UWB) tags and 70 receivers (anchors) were installed. This means warehouse operators at Budweiser’s 15,000 m2 facility can pinpoint in real time the precise location of the 20,000 pallets–with an accuracy of 30 cm. This means they are able to ensure the right pallet is with the correct driver, and inform and redirect drivers should the pallets go astray. As a result of implanting Sewio’s UWB-powered RTLS, warehouse utilization has risen by 19% and system uptime is 24% higher (at 99%). It has also given logistics managers visibility of every forklift, its location, distance traveled and metrics for daily attendance.

The increased overview digitalization brings to your staff, premises and assets means optimizing your processes to the full. Better streamlining, improved personnel safety and the pinpoint precision of the positioning system mean reducing the amount you are paying in terms of time, manpower and money. Using digitalization, not only are you optimizing every aspect of your processes but you are also reaping some serious rewards.

Tags:tracking
Previous : RIDDLE&CODE Launches Hardware Car Wallet With Daimler
Next : The 5 Fraudulent Practices You Have to Look Out For as an SME