The global installed base of smart street lights reached 10.4 million units in 2018, of which the European market accounted for nearly 40 percent. Growing at a compound annual growth rate (CAGR) of 24.5 percent, the number will reach 31.2 million in 2023. The European market was also at the end of 2018 the largest for smart waste sensor technology, accounting for more than 50 percent of the 379,000 connected waste bins and containers installed globally. The number of connected waste collection points is furthermore forecasted to grow to nearly 1.5 million units in 2023, representing a CAGR of 30.8 percent.

The Asia-Pacific region was at the same time the largest market for smart parking and smart city surveillance technology in 2018. The number of smart parking sensors installed globally was nearly 1.1 million units in 2018 and is forecasted to reach 2.6 million in 2023. The Asia-Pacific region accounted for more than 40 percent of the installed base of smart parking sensors in 2018, while the European market was close behind with a share of just below 40 percent. Meanwhile, the market outside Europe and North America represented more than 70 percent of the global smart city surveillance equipment market valued at € 6.5 billion. China was by far the largest contributor with safe city projects being rolled out at an unprecedented scale across the country. The global market for smart city surveillance equipment is expected to experience a year-on-year growth of 24.5 percent throughout the forecast period. 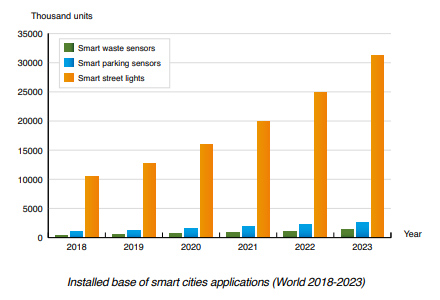 Wireless connectivity technologies is today the primary option for connecting assets in public spaces and wired communications is mostly confined to specific use cases such as fixed video surveillance and to some extent also smart street lighting.

He adds that the use of 3GPP-based LPWA technologies are expected to experience a particularly strong growth across several segments in the coming few years, as many vendors recently have launched or are in the process of launching products featuring NB-IoT or LTE-M connectivity.

“The number of street lights, parking sensors and waste sensors connected using cellular LPWA technologies will more than 30-fold in the next 5 years.”