Quectel, the leading global IoT module supplier, is pleased to announce today that its LTE modules and dongles can now be deployed in combination with the eMBMS middleware of ENENSYS Technologies, a leading provider of media delivery solutions.

Integration of the ENENSYS CubeAgent into Quectel’s EC25 LTE module family supports eMBMS features and the solution is already in use. 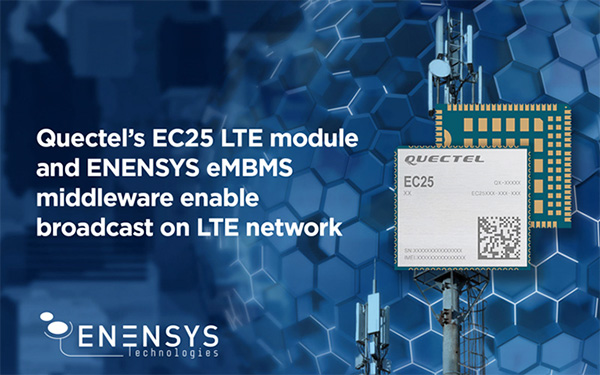 “We’re delighted to be working with ENENSYS to integrate its CubeAgent Mobile middleware with our LTE modules and enable eMBMS features for broadcast networks across the world,” said Alexander Bufalino, VP Marketing, Quectel Wireless Solutions.

“LTE broadcast is very different from the traditional unicast mobile propositions so we’re excited to be opening up huge new opportunities for broadcast network providers with the integrated features that our modules and the ENENSYS middleware enable.”

“Video has experienced explosive growth in the past few years on the mobile network,” stated Bartolo Scanavino, ENENSYS Telecom Market Director. “Adopting eMBMS for the delivery of Live Video as well as software updates can help service providers to improve the quality of experience for their subscribers.”

Tags:Quectel
Previous : The ‘real’ version of the IoT is happening
Next : IoT device management platform suppliers should do more to communicate their differentiators