Global cellular IoT module shipments increased 8% YoY and 15% QoQ during Q2 2020, solely driven by the revival of IoT demand in China after the COVID-19 outbreak, according to the latest research by Counterpoint Global Cellular IoT Module and Chipset Tracker.

Demand across Europe and North America suffered in Q2 2020 due to COVID-19, falling 8.3% YoY and 7.9% YoY, respectively, in these key regions. In terms of the total global IoT module shipment revenues, the market grew 15% YoY during Q2 2020. Quectel, u-blox, Sierra Wireless, Fibocom and Thales (Gemalto) were the leading suppliers in terms of the global IoT module revenue share during the quarter.

Talking about the China rebound and other factors helping a few IoT module vendors to race ahead, Research Associate Soumen Mandal said:

“Quectel had a terrific quarter as it gained market share across regions. The steady investment in R&D, coupled with a variety of module launches across different technologies and application categories, helped the vendor maintain the momentum from Q1 2020. During the period, Quectel also set up an intelligent manufacturing center in Foshan to increase its capacity. This should help the vendor scale up its portfolio to cater to the growing demand.” 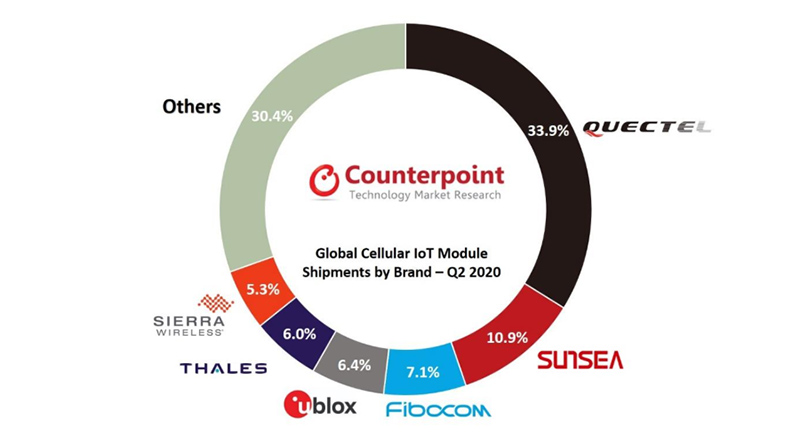 Mandal added:
“Sunsea AIoT group maintained its second position with an increase in its market share following 29% QoQ growth in demand for its modules. However, it saw a flat YoY growth. Fibocom, another fast-growing vendor, became the third-largest IoT module supplier in Q2 2020 in terms of shipments, surpassing the incumbents Thales, Sierra Wireless and Telit. Fibocom also acquired Sierra Wireless’s automotive embedded module business during the quarter, which should further boost its market share. u-blox also jumped back to the top five rankings during the quarter, capturing 6% share with demand for its 4G IoT module in China and other regions. u-blox also acquired Thingstream in the quarter to help customers connect their sensor-based devices seamlessly to the cloud. As Counterpoint has been highlighting the move to a platform play, the IoT players are extending their offerings across the value chain, either in terms of acquisitions or striking partnerships to build a robust out-of-the-box chipset-to-cloud connectivity. The slowdown in the automotive sector affected the demand for Thales’ IoT modules across the pandemic-stricken Europe and North America markets and the vendor slipped to the fifth position. But with an improving market landscape and focus on LPWA modules, Thales can make a comeback in coming quarters.”

Commenting on the top-selling IoT module models, Research Associate Anish Khajuria said:
“During the quarter, the Quectel BC66, SIMCom SIM868, Fibocom N700 and the u-blox Toby R200 were the best-selling modules for the respective vendors. However, the top five spots in terms of the global IoT module model shipments went to Quectel.” 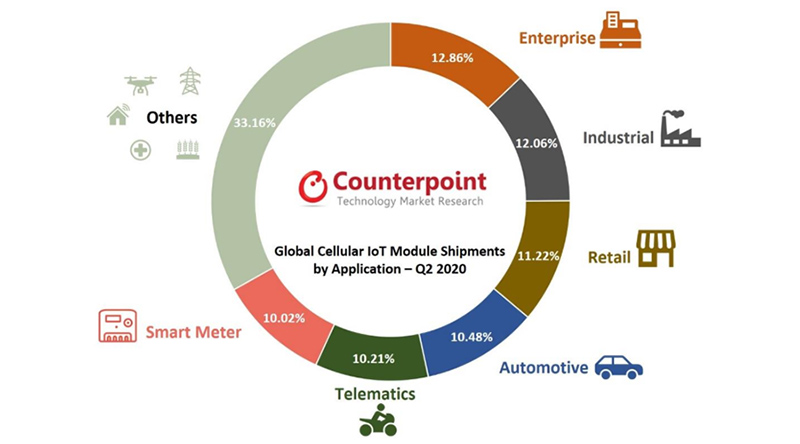 Commenting on the IoT module cellular chipset supplier landscape, Shah said:
“Qualcomm increased its market share, capturing almost half of the cellular baseband chipsets for IoT modules globally. Qualcomm benefits from its global scale, partnerships, carrier certifications and partly from lack of focus and development from Intel in this segment. MediaTek struggled to increase market share in this segment as small Chinese module vendors could not recover from the COVID-19 outbreak and the share shifted towards Qualcomm-centric IoT module players. It will be interesting to monitor the rise of Sequans, Sony (Altair Semi), Unisoc, ASR and u-blox in coming quarters, especially across the high-growth LTE-Cat 1 and LPWA IoT module categories. The rise of Sequans in North America and Japan, Altair in Europe and Japan, and ASR and Unisoc in China will shape the key regional competitive landscape for the cellular IoT module baseband chipset suppliers going forward.”

The comprehensive and in-depth ‘Global Cellular IoT Module and Chipset Tracker 2018Q1-2020Q2’ and ‘Global Cellular IoT Module by Brand by Tech by Application Tracker 2018Q1- 2020Q2’ reports are a part of Counterpoint’s IoT (Internet of Things) Service. They are available for download for subscribing clients.
Recommended IoT report - Download for free now !

Tags:IoT marketIoT module
Previous : Watching over the elderly with IoT
Next : What is the IoT value chain and why is it important?