The integration of cameras to enable various video-based solutions in commercial vehicle environments is an important trend in the fleet telematics sector.

The frontrunning North American video telematics market is more than twice the size of the European, which is so far largely dominated by activities in the UK. Berg Insight estimates that the installed base of active video telematics systems in North America reached 2.1 million units in 2020. Growing at a compound annual growth rate (CAGR) of 16.2 percent, the active installed base is forecasted to reach more than 4.4 million units in North America by 2025.

“Streamax is the leading hardware provider, that also offers software dashboards which are widely used together with its devices.”

He adds that Lytx has the largest number of video telematics subscriptions, with an estimated installed base in the range of 700,000 connected devices.

“Samsara stands out among the general fleet telematics players as a particularly strong provider with a sizable number of camera units deployed across its subscriber base”, continued Mr. Andersson. 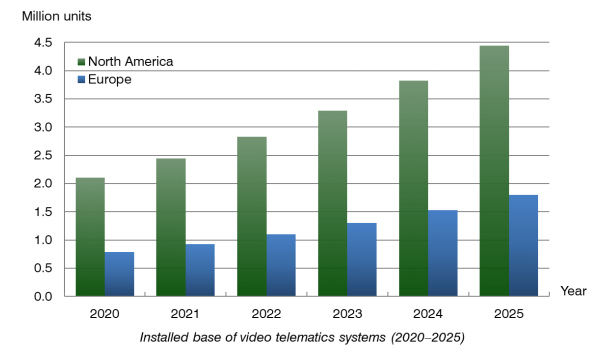 “These players have all reached estimated installed bases in the tens of thousands”, concluded Mr. Andersson.