In 2020, the global installed base of individually controlled smart street lights amounted to 13.0 million units (excluding China). The corresponding figures for the smart parking and smart waste sensor technology markets were at the same time 957,000 and 657,000 units respectively.

Smart parking sensors refers to in-ground or surface-mounted parking occupancy detection sensors while smart waste sensor technology consists of fill-level sensor devices that may either be pre-integrated into bins and containers, for example as a smart bin offering, or retrofitted on existing collection points.

The smart street lighting market has now gained significant traction and its installed base will grow at a robust CAGR of 23.4 percent to reach 37.4 million units in 2025.

The number of installed smart parking sensors is expected to see a slightly slower growth of 21.6 percent (CAGR) while the smart waste sensor technology market will be the fastest growing of the three with a CAGR of 29.8 percent.

The largest of the five covered smart city application areas was meanwhile the smart city surveillance market, which reached a global market value of € 9.9 billion in 2020. The market, which includes both fixed and mobile video and audio surveillance solutions, is expected to grow at a CAGR of 19.7 percent throughout the forecast period.

“Looking just at the sheer volume of various types of smart city device shipments, China has in the past few years outrun most other countries in the world and now plays in a league of its own.”

Outside China, Europe has emerged as the leading smart city technology adopter and North America constitutes the second largest market. An exception is however the North American market for smart city surveillance, which was about 27 percent larger than the European in 2020. 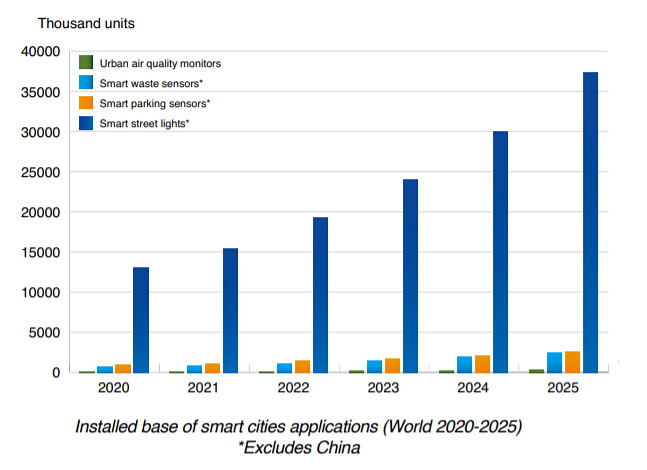 “While publicly funded deployments of smart city technologies in many cases were delayed due to the Covid-19 pandemic, they were more importantly not cancelled thanks to their growing status as key infrastructure projects,” continued Mr. Ostling when asked about the Covid-19 impact on the overall market.

The pandemic has in many ways highlighted the benefits of remotely managed infrastructure and the need for smart city technologies, which should help the smart city market to recuperate strongly after a short period of slightly reduced growth.