According to a new report from the leading IoT market research provider Berg Insight, the number of active fleet management systems deployed in commercial vehicle fleets in North America was 12.3 million at the end of 2020.

At the end of 2020, the top-30 vendors together had more than 11 million vehicles under management in the region and the top-10 represented almost 50 percent of the total installed base in the Americas.

Berg Insight ranks Geotab and Verizon Connect as the leading fleet telematics providers in the Americas. The two front-runners are the only players which have surpassed the milestone of 1 million active fleet management subscribers in the region. 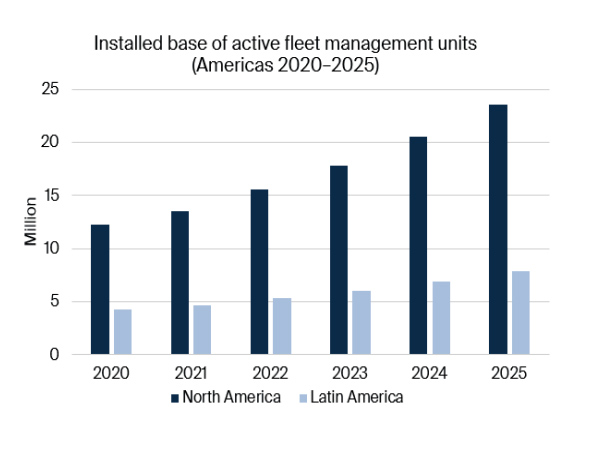 Additional key providers with more than half a million units include Omnitracs, Trimble, Lytx, Zonar Systems and Samsara.

“The remaining top-15 players are Michelin, Fleet Complete, Gurtam, KeepTruckin, Teletrac Navman, Azuga, CalAmp and PowerFleet, all having installed bases of at least a couple of hundred thousand units in the region”, continued Mr. Andersson.

He adds that Michelin has established a strong position in the fleet management space through multiple acquisitions in the Americas and beyond. Bridgestone is now following suit, having acquired the European market leader Webfleet solutions (formerly TomTom Telematics) in 2019 and most recently US-based Azuga in September 2021. Driven by growth strategies based on M&A activity and high-pace organic growth, Berg Insight anticipates a future scenario where the global fleet management market is dominated by a handful of providers with installed bases measured in the millions.

“The milestone of one million connected units globally has already been surpassed by ten solution providers and three of them have reached the two million range.”