The M2M market has become a fully mainstream segment of the cellular industry. By the end of 2011, most major mobile operators in North America, Europe, and the Asia-Pacific region had established M2M business units to focus their efforts in this fast growing market. 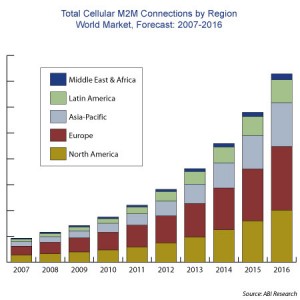 The two largest cellular M2M market segments over the forecast period, by revenue, will be automotive telematics and smart energy. Automotive telematics, including factory-installed systems such as GM’s OnStar service, aftermarket services such as usage-based insurance, and fleet management systems, will together represent more than $15.5 billion in 2016. Meanwhile, smart energy, specifically cellular connectivity to smart meters and data concentrators, will represent more than $7.5 billion in 2016.

“For example, AT&T announced on January 9, 2012 that it would be reselling Axeda’s M2M application platform in a US carrier exclusive deal. This platform will enable AT&T customers to more easily develop and deploy complex M2M applications.“