According to a new research report from the analyst firm Berg Insight, the market value for Intelligent Transport Systems (ITS) deployed in public transport operations in Europe was € 0.76 billion in 2011.

Growing at a compound annual growth rate of 15 percent, this number is expected to reach € 1.5 billion by 2016. Berg Insight is of the opinion that the European market for ITS for public transport is in a growth phase which will last for several years to come. The fluctuating economic climate has in most countries had little effect on the market as the public investments which underpin a major part of the ITS initiatives have remained stable throughout the periods of crisis. The vendor landscape for public transport ITS consists of a variety of actors. The companies INIT, Trapeze Group and IVU have emerged as leaders in Europe, having broad product portfolios and large numbers of installed systems in many countries. There are also local players with considerable market shares on regional markets in Europe, including Ineo Systrans and Vix. Another group of vendors are focused on specific parts of complete ITS such as specialised hardware units or software applications.

“The public transport ITS market in Europe is favoured by several concurrent developments, including UITP’s sought-after doubling of the public transport ridership, the EBSF EU project, and generally higher expectations among travellers.” 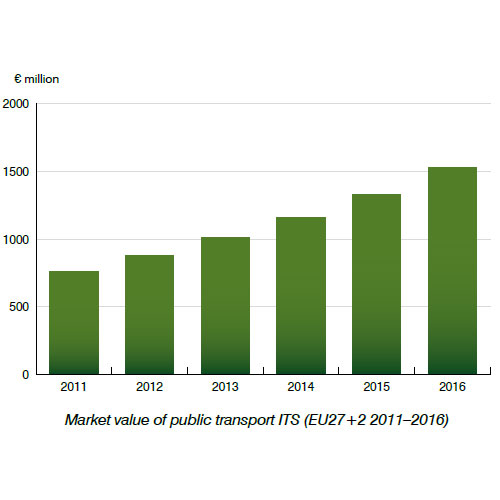 “Increasingly sophisticated solutions for traffic management and passenger information are available which – if implemented correctly – eventually can put public transport on par with private transportation modes in terms of travelling times and flexibility“.

Mr. Andersson adds that a noteworthy development is the increasing integration of smartphone-based solutions in public transport ITS, used for various traveller-centric applications as well as business performance overviews for operators, and most recently also as affordable tracking solutions enabling real-time passenger information (RTPI).

About Berg Insight
Berg Insight offers premier business intelligence to the telecom industry. We produce concise reports providing key facts and strategic insights about pivotal developments in our focus areas. Our vision is to be the most valuable source of intelligence for our customers.