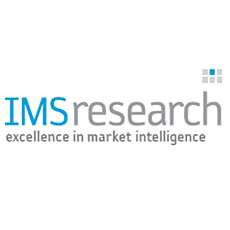 This revenue growth will be driven by the continued automation of gas endpoints via new two-way meters and retrofit communications modules, as well as an added boost from the large Southern California Gas Company (SoCalGas) fixed network installation. These findings have been presented in IMS Research’s recently published report, The World Market for Gas Meters – 2012.

The potential for labor cost savings is the most important factor justifying the installation of remote communications on utility gas endpoints in North America. IMS Research Analyst Jacob Pereira comments: 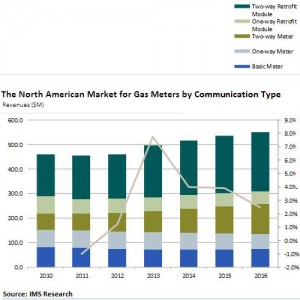 In 2011, 6.5 million communicating devices for gas meters were sold in North America, with more than 80 percent of these estimated to have been installed on existing diaphragm meters.
“The durability of diaphragm measurement technology gives meters in North America a lifespan of 30-40 years on average. This has caused many utilities to simply add a communications module to the meter, rather than replacing a device that will continue to work for many years. This trend is expected to see a noticeable uptick in 2013, when SoCalGas will begin to automate their roughly 6 million gas end points in earnest, with 4.5 to 5 million retrofit communications modules expected to be shipped,” continues Pereira.

In North America almost all advanced gas meter installations are read via a mobile device, while the SoCalGas installation is the first attempt by a major gas utility to implement fixed network reading equipment. Pereira adds:
“The SoCalGas installation is not the norm in North America. Utilities continue to see a direct return on investment from mobile read technology, while the extra cost of fixed network metering is typically viewed as unjustifiable. It remains to be seen what new use cases or benefits might arise from SoCal’s large installation, and how it will affect the view of utilities in North America as they continue to automate their gas endpoints. One thing is clear; the trend towards more communications in the gas meter market is unlikely to abate anytime soon.”