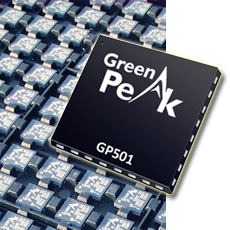 GreenPeak Technologies, a leading semiconductor company in low power RF communication, with a rich offering of communication solutions for Smart Home applications, today announces the GP501, a new generation of ZigBee transceivers which contains a sophisticated coexistence scheme that allows Wi-Fi, Bluetooth and ZigBee chips to work side by side in the same device. The GP501 also contains Deep Packet Inspection allowing deep sleep modes of set-top boxes and other host devices by means of Wake-on-LAN messages.

ZigBee shares the 2.4 GHz frequency band with other Wi-Fi equipment. The GP501 has a coexistence interface to allow optimized and co-located ZigBee/Wi-Fi radios to work in the same device, successfully avoiding RF interference when operating simultaneously. This coexistence interface enables arbitration over the shared radio frequency medium to prevent contention, signal degradation and data loss.
Another advantage of the GP501 is its small size: its 32-pin 5×5 mm2 footprint allows integration into even the smallest product form-factors.

A new key feature of the GP501 ZigBee transceiver chip is the Deep Packet Inspection for ZigBee applications. Deep Packet Inspection (DPI) enables advanced packet management, allowing the host processor to go into a deep-sleep mode to conserve power. While most other ZigBee transceiver chips only include a superficial inspection of the MAC and PHY headers, the GP501 looks beyond these layers and executes a Deep Packet Inspection and based on the outcome, the chip can decide if the packet has to be passed on to the higher layer application or can be ignored. The DPI engine is also security aware, blocking unauthorized packets without involving the host processor and ensuring the system does not waste energy analyzing non-compliant packets. The DPI feature can be used for Wake-on-LAN functionality, where ultra-low power ZigBee is used to wake up the main processor from its sleep mode to enable Wi-Fi networking.

“The Wi-Fi Coexistence Interface and Deep Packet Inspection enabling Wake-on-LAN are new and exciting features of the GP501”, says Cees Links, CEO of GreenPeak Technologies.
“These features make the GP501 the optimal choice for the set-top box/gateway market. With its small 32-pin footprint, the GP501 is a great successor to the already very successful GP500. Once again GreenPeak is leading the industry in adding smart functionality and superior performance to its ZigBee devices.”

About GreenPeak Technologies
GreenPeak Technologies is a fabless semiconductor company and one of the leaders in the ZigBee market segment with a rich offering of semiconductor products and software technologies for Smart Home data communications and the Internet of Things. GreenPeak is privately funded. It is headquartered in Utrecht, The Netherlands and has offices in Belgium, France, USA, Japan and Korea.
GreenPeak has won the prestigious 2012 Red Herring Top 100 Europe award and is recognized as a leader in developing new wireless technologies for consumer electronics and smart home applications, demonstrating rapid growth and adoption by major customers. For more information, please visit www.greenpeak.com.
Tags:BluetoothGreenPeaksmart homesWi-FiZigBee
Previous : Hughes Announces First Inmarsat BGAN M2M Terminal to Receive Hazardous Locations Accreditation
Next : Sensinode Announces Availability of Certified Compliant Platform For New ZigBee-IP Standard