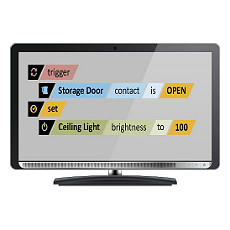 SysSCRIPT is a powerful, menu directed scripting software for Systech’s family of SysLINK M2M/IoT gateways. The application allows anyone to build an IoT remote access and control application in minutes.

Industry experts agree there will be over 50 billion IoT devices worldwide by the year 2020. Reaching this goal will require a new generation of IoT tools that can streamline the development process. This week, Systech is introducing such a tool, the Systech SysSCRIPT, which allows for the creation of IoT solutions in minutes, rather than months.

Systech is optimizing and simplifying how IoT solutions are implemented. Last year, Systech introduced the SysLINK IoT gateway that can be constructed like toy building blocks. The hardware building blocks provide connectivity to a wide variety of IoT sensors and actuators with interfaces such as cellular, Wi-Fi, ZigBee, and Z-Wave.

“We are not talking about just an incremental improvement. Systech’s new SysSCRIPT technology provides an order of magnitude improvement in M2M deployment time. And, sooner to market means sooner to revenue.”

You will be able to see the power of Systech SysSCRIPT first hand at demonstrations held throughout January, 2015 at several IoT trade shows. Systech will be exhibiting at the Battle of the M2M Platforms and the deviceWISE Summit being held prior to the M2M Evolution event, January 27-30 in Miami Beach.