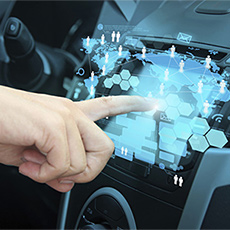 Alibaba Group Holding Ltd. is starting a 1 billion yuan ($160 million) fund with SAIC Motor Corp., China’s largest automaker, to develop a connected car that may go on sale next year.

Alibaba, Asia’s largest Internet company, and SAIC Motor are setting up a joint venture to create a platform for development and operation of the Web-enabled car, the Shanghai-based carmaker said in an e-mailed statement. Besides providing cloud computing, Alibaba will also add digital entertainment, maps and financial data, the Hangzhou, China-based company said on its microblog.
The Chinese e-commerce giant is the latest to join a clutch of Internet companies foraying into connected vehicle projects as China encourages companies outside the traditional auto industry to tie up with existing manufacturers to spur innovation and competition. China’s largest search engine operator Baidu Inc. said it may introduce an autonomous car this year, joining companies like Google Inc.

SAIC said in the statement:

“In the age of the Internet economy, cross-boundary integration has become an inevitable trend. The cars of the future must be Internet-oriented.”

Among other Chinese companies, Leshi Internet Information & Technology (Beijing) Co., a maker of Web-enabled TVs, has said it would invest billions of dollars into developing a connected electric car.

Apple Inc. has been working on an electric auto and is pushing to begin production as early as 2020, people with knowledge of the matter said last month. Google said in January it aims to have a self-driving car on the road within five years.

Homegrown YunOS
Alibaba could use its homegrown operating system, YunOS, in the cars it develops as the e-commerce company attempts to increase its adoption across tens of millions of smartphones.
The Internet company is expanding beyond its core business of e-commerce, with investments in areas such as finance and entertainment content, as part of a plan to serve 2 billion customers globally.
Alibaba, founded in 1999 by a group led by former English teacher Jack Ma, held the world’s largest initial public offering when it listed in New York last year.