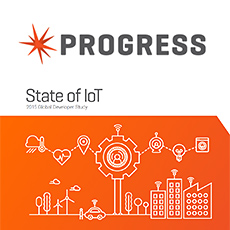 Progress today announced the results of its latest industry survey, in conjunction with Harbor Research. Initial findings show an impressive 65 percent of Internet of Things (IoT) apps in production today are generating real revenue. The study results, undertaken by Harbor Research, also reveal developers expect this figure to rise to 80 percent by 2018. The industries that currently lead in IoT development include smart homes, wearables, automotive and sports/fitness.

The survey, which took place during January and February 2015, solicited responses from 675 application developers polled from the U.S., the U.K., Germany, France, Sweden, The Netherlands and India. Of those surveyed, 45% are developing IoT apps. Developers based in the U.S. are developing the highest number of IoT apps (58%), followed by The Netherlands (50%) and Germany (43%).

When asked which industries are key to IoT app development, research respondents cited smart homes (19%), wearables (13%), automotive (11%) and sports/fitness (11%) as the primary markets. They also named these industries as having the highest IoT app revenue today. The public sector was at the bottom of the list (4%).

A shift is predicted in the next three to five years, with app developers expecting healthcare (14%), smart city (13%) and automotive (12%) as the top three industries for IoT app development and revenue generation. Public sector also rises to match today’s popular wearables market (both 8%).

Java proves the most popular platform/language used to collect and integrate data from the server side (55%), followed by PHP (17%) and Node.js (12%). Of respondents, 40% always or usually use a Rapid Application Development (RAD) tool to build apps, rather than building from scratch— a significant shift from traditional development approaches.

Mark Armstrong, Vice President and Managing Director EMEA at Progress, said: “The number of connected things is set to explode, with Gartner¹ forecasting it will reach 25 billion by 2020.”

“Our research shows developers put their long-term bet on industry and infrastructure IoT apps as the foundation for revenue generation. They just need the right technology tools to gather, analyze, use and manage contextual IoT data to maximize this opportunity, from both a creative and revenue perspective.”

“With the right approach, developers can turn their big ideas into business reality, helping define the IoT and its future.”

Developers around the globe agreed security and personal privacy, data privacy and protection from malicious attack, and general integration and data management are the top challenges in designing, deploying and engaging customers with IoT apps. They also confirmed these are the biggest challenges in monetizing IoT apps.

Survey respondents believe commercial vendors (31%) and the open source community (24%) have the greatest power to help overcome these top challenges. They have little faith in the potential contribution from government (8%) or industry bodies (7%).

While 77% of respondents consider the IoT opportunity exciting, many still feel they are lacking the necessary technology, skills or tools: 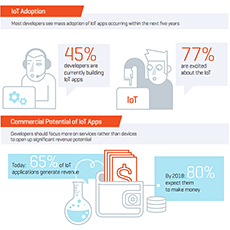 To read the full report and see all of the survey findings:
Progress IoT Survey Report 2015
Progress IoT Survey Infographic 2015
Harbor Research is a research, technology and consulting business that has a specific practice on IoT. Its work is global and it tracks market movements, product development and the IoT realities across executive, IT and developer audiences.
¹ Gartner. “Predicts 2015: The Internet of Things”, 30 Dec 2014
Tags:IoT application developmentIoT applicationsIoT market
Previous : Sierra Wireless Targets Better IoT Interoperability with New Open Interface Standard for Wireless and Sensor Technologies
Next : Sierra Wireless next-generation embedded modules offer integrated device-to-cloud architecture for the Internet of Things