According to a new research report from the analyst firm Berg Insight, the market value for Intelligent Transport Systems (ITS) deployed in public transport operations in Europe was € 1.03 billion in 2014.

Growing at a compound annual growth rate of 7.2 percent, this number is expected to reach € 1.46 billion by 2019. Berg Insight is of the opinion that the European market for ITS for public transport is in a growth phase which will continue throughout the forecasted period. The fluctuating economic climate has in most countries had limited effect on this market as the public investments which underpin a major part of the ITS initiatives have remained stable throughout the periods of crisis in most countries.

A group of international aftermarket solution providers have emerged as the leaders on the European market for public transport ITS. The dominant providers are Trapeze Group, INIT and IVU, all having European headquarters in the German-speaking region and substantial installed bases across a multitude of countries in Europe and beyond. Examples of companies with major market shares on national markets in Europe include Ineo Systrans in France and Vix in the UK. Other significant players include the Spanish groups Indra, GMV and Grupo Etra, Swarco’s subsidiary Swarco Mizar in Italy, Atron in Germany, Italy-based PluService, the Norwegian provider FARA and the Belgium-based company Prodata Mobility Systems. Volvo Group is moreover a notable player from the vehicle OEM segment, offering the ITS4mobility system in partnership with Consat Telematics in Europe.

“Similarly to adjacent telematics verticals, the European market for public transport ITS has in recent time seen a number of significant mergers and acquisitions.”

He mentions the recent deals Prodata Mobility Systems which was acquired by Kapsch CarrierCom in July 2014 and Sabatier Geolocalisation’s acquisition of SPIE Sud-Est’s Silvie business in October in the same year. The leading ITS provider Trapeze Group has moreover acquired a large number of providers of complementing technology in 2012–2014. Berg Insight anticipates that this consolidation trend will continue in the upcoming years.

“Several players continue to have inorganic growth as a key strategy, so further M&As can be expected among telematics and ITS providers for public transport in 2015–2016”, concluded Mr. Andersson. 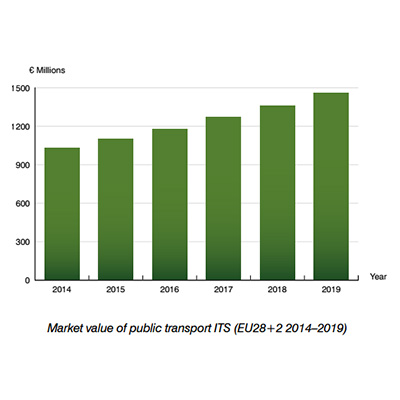