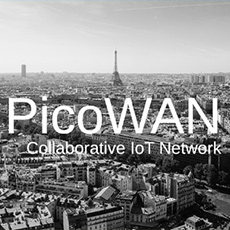 PicoWAN’s aim is to be the first LPWAN (Low Power – Wide Area Network) RF network for connected objects, which will be collaborative, global, cross-boarder and available at a very low price.

It will be launched in Europe from June 2016.

“PicoWAN is a project close to my heart. I have been deeply invested in studying its feasibility and have even filed 3 patents. The potential is huge.”

A revolution in the Internet of Things

The key to this innovation is a unique wireless communications network protocol based on the use of pico-gateways, as opposed to rooftop concentrators and antennas, which come in the form of smart plugs connected to the internet via WiFi or Ethernet. Embedding a LoRa™ IC, the range of pico-gateways is potentially as long as the sophisticated antenna gears installed on PicoWAN rooftops by telcos. As a result of its low-cost and its easy installation inside buildings, the network can be densified at will and made fail–safe, penetrate very deep indoor resulting in a much higher QoS (Q
uality of Service).

A collaborative network at a very low price 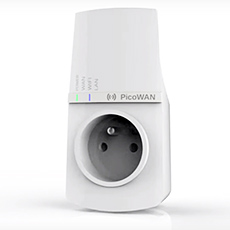 The cost of a pico-gateway is some 100 times less than the cost of a rooftop installation. Instead of investing tens of million euros in infrastructure, PicoWAN will create a highly competitive LP-WAN thanks to the viral diffusion of very low-cost pico-gateways.

To ensure the deployment of a global network throughout Europe, PicoWAN plans to distribute up to 200,000 free pico-gateways by the end of 2016.

PicoWAN will offer a subscription plan starting at £0.50 pence per year per connected object. Those who will deploy pico-gateway networks locally will receive up to 50% of the income resulting from the connections passing through their pico-gateways.

The software embedded in connected objects will be freely available to all developers and integrators developing on vertical or consumer markets, who can then set up their own IoT networks. This technology will facilitate the launch of multiple connected objects in all domains (health, agriculture, home automation, industry, and more), instantly supported by the PicoWAN network anywhere.

All LoRaWAN™ objects can be made compatible with ease.

Join us at the Mobile World Congress in Barcelona in March, 2016 for a demonstration of PicoWAN network…
Tags:IoT networkLoRaLPWAN
Previous : Semtech LoRa-Based Internet of Things Wide-Area Network to Deploy with Telecom Operator Orange
Next : M2M Spectrum Networks Joins LoRa Alliance