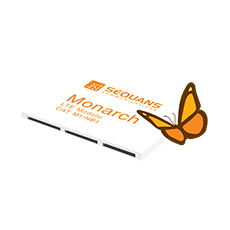 “We are very proud to highlight the key capabilities of Monarch in this first-in-the-industry live demo of a Cat M1/NB1 chip,” said Georges Karam, Sequans CEO.
“In designing Monarch, we worked from day one to make sure it would be fully optimized in both cost and power consumption to fully unleash the LTE for IoT market potential. I am very excited to say that Monarch is operating as designed and we expect to have it ready for network deployments in Q4.”

“Monarch is an entirely new, fully-optimized silicon design, and not an earlier generation chip modified with software to simulate Cat M1 and NB1 capabilities, as others appear to be doing.”

“We are closely engaged with major operators, major eNodeB vendors, and key technology partners to fully address deployment plans for Cat M1 and NB1 networks, beginning first in the United States. Our pipeline is filling quickly as Monarch has already been selected by several OEMs and ODMs who are aggressively developing modules and devices for some of the most exciting IoT applications imaginable for the LTE for IoT marketplace—applications including health and fitness wearables, smart energy meters and asset trackers, industrial monitors and sensors.”

According to ABI Research, a leader in technology market intelligence, cumulative cellular M2M module shipments from 2016 through 2021 will reach 1.1 billion units; LTE modules will experience the highest growth, exceeding 50 percent of all cellular M2M shipments in 2021.

“With the recent ratification of the Cat M1 and Cat NB1 standards, it is pretty clear that LTE will rapidly replace 2G and 3G connections in the major M2M markets.”

“Sequans’ introduction of its Cat M1/NB1 chip, already working and being developed rapidly by Sequans in close collaboration with leading operators and OEMs, shows the strong momentum developing behind LTE Cat M1 and Cat NB1.”

“Narrowband LTE technology is of crucial importance to the M2M and IoT markets as many use cases will require nation-wide and carrier-grade connectivity. Our Monarch chip is an ideal solution to address this demand,” said Karam.

The Monarch demo will be shown to interested parties at Super Mobility Week by appointment only, September 7-9.

* Cat M1 and Cat NB1 are the new narrowband categories in Release 13 of the 3GPP LTE standard, recently published, that specifically defines LTE for use in low data rate and low power IoT and M2M applications. Two new narrowband categories have been defined: 1) Category M1, also known as LTE-M and Cat M, delivers about 1 Mbps maximum in a 1.4 MHz channel, and Category NB1, also known as narrowband IoT, or NB-IoT, delivers about 40 kbps in a 200 kHz channel.