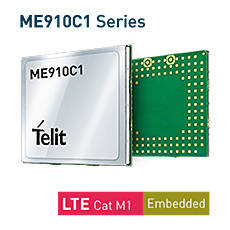 Telit today announced that it is collaborating with Verizon as a key supplier of IoT modules for the carrier’s LTE Category M1 (LTE-M1) service.

In cooperation with Qualcomm Technologies, Inc., a subsidiary of Qualcomm Incorporated, Telit is delivering IoT modules in full alignment with Verizon’s features and timing requirements. IoT integrators and providers in the U.S. and other regions looking to export to North America will be able to apply knowledge and experience designing for the popular form xE910 factor to take advantage of Verizon’s nationwide LTE-M1 coverage planned to occur by the end of Q1 2017.

The ME910C1-NV, is a LTE-CAT M1 IoT module based on Qualcomm Technologies’ MDM9206 modem. Qualcomm Technologies’ CAT M1 products are fundamental to the rollout planned by Verizon, and Telit is working closely with both companies to ensure the timely availability of its module. Because the module is a member of Telit’s best-selling xE910 family, it can be applied as a drop-in replacement in existing devices based on family models for 2G, 3G and even higher categories of LTE. The ME910C1-NV natively supports Verizon’s ThingSpace platform, the carrier’s Web-based developer platform for IoT.

“Telit has been a valued supplier, providing several radio modules for Verizon’s 2G, 3G, and 4G networks. Telit’s commitment to deliver cost effective IoT solutions is important to Verizon and our customers developing IoT solutions for our 4G LTE network,” said Chris Schmidt, Executive Director Device Technology, at Verizon. “Collaborating with Telit to bring IoT modules to market was a natural fit considering the numerous use cases Cat M1 will support for our customers seeking low bandwidth, optimized battery, and extended coverage, as well as solving for longevity.”

“We are excited to work with both Telit and Verizon to support the rollout of LTE Category M1 for IoT services,” said Jeffery Torrance, vice president of business development, Qualcomm Technologies, Inc. “The MDM9206 modem brings many enhancements and optimizations to LTE that can help reduce IoT device complexity, supports multi-year battery life and allows IoT products to function in a diverse set of operator deployments worldwide. We look forward to working with Telit and Verizon to help deliver and grow exciting new IoT services.”

“There is an enormous sense of urgency in the IoT ecosystem to make LTE-M1 commercially available everywhere, particularly in North America. A collaboration like this one, among partners that are leaders in their respective spans of the IoT value chain, is a tried-and-true strategy to achieve results the market expects and demands from IoT solution providers.”

“By leveraging the global popularity of the xE910 form factor, the flexibility and robustness of the Qualcomm Technologies’ modems powering the module and the coverage and reliability of Verizon’s 4G LTE nationwide network, this strategic partnership is delivering some of the shortest paths to the market for the much anticipated arrival of LTE-M1 in the U.S.”