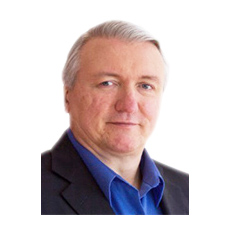 1. Enterprise operations teams, who have been hesitant about connecting things to the cloud, will be even more concerned after the high visibility DNS attack last year.
2. Cloud-based IoT software vendors will be seeking means to get “back onto the ground”, and sending only limited data to the cloud.
3. However, it will still be very hard to secure “connected-but-dumb” devices.
4. Things need an operating stack to get smarter so they can, among other things, fend themselves against malicious attacks.

These connected devices are often “dumb” end-points – such as motors, sensors, and cameras – which do not have the computing capability to execute any security logic that is beyond simple user name and password matching.

Industrial IoT is centered on a vast array of “Things” — such as mobile devices that are powered, programmable, telemetric, passive and stationary, as well as all kinds of sensors, devices, equipment and machineries. These “Things” can be categorized into three categories:

These types of Things may potentially be exposed to three distinct types of danger: Device Hacking, Identity Theft and Device Leaks.

The exposure to the Internet is the one inevitable link through which any IoT system is vulnerable to these three attacks.

Risky Business on the Internet

The Internet allows hackers to exploit a device’s interface and take control of it by using the same mechanism used by IoT platforms in the cloud. Since devices are often kept in unsecured environments, any person who has physical access to a device can use local ports to get into the device and run programs, which may not be authorized. By virtue of being inside the device, these programs take on the device’s identity and appear to be the legitimate, trusted device allowing them to engage in illegal interactions with other systems and/or cloud services.

By snooping into the network traffic, malicious programs can steal device identities and behave like the real devices. This enables malicious programs to disrupt and potentially spread the infection to the local environment and/or other reachable devices and services, including the IoT platform service.

When a device’s registry is hacked from the authorization service (including the IoT platform itself), multiple devices become vulnerable by exposing their address and credentials to hackers. These credentials can then be used to interact with the devices with the same authority as the IoT platform or other services running on the platform would have.

The only way for an Internet-connected device to be secure is to have all of the following 3: (1) the device itself must be protected, (2) the device’s physical environment needs to be secured, and (3) the device’s connection to the Internet must be secured. Cloud-based IoT Platforms cannot solidify a device’s security by residing in the cloud.

In the past, OT devices were never exposed to the Internet and were always kept isolated from IT networks. Mobile Devices and Field Devices were managed closely from the hardware to the cloud by vertically integrated systems. This approach used to work adequately. But times have changed. OT wants to merge with IT, and Mobile and Field devices are becoming service delivery points, which will create the need for providers to be able to reach out to the devices directly.

This requires that devices ensure their own security before being connected to the jungle of devices, applications and people. Instead of relying on cloud-based IoT platforms, devices will have to get smarter intrinsically to defend themselves. They can do this by running thing operating stacks locally — where the device is physically residing. It will be the responsibility of the stack to make sure devices are secure by controlling access to other entities.

Enterprise customers will not deploy an IoT solution if the devices are vulnerable. Cloud-based IoT platforms will continue to be inhibited because of their limited security offerings. What this ultimately means is that cloud-based IoT platforms will become custodians of the device data, while device manufacturers are left to ensure device security through other means.

About the author: Oleg Danilov, Chief Architect and Founder of Atomiton, a next generation software company for the IoT age using unique technology to enable smart systems. Oleg brings over 30 years of experience in sophisticated software engineering and innovation, including end-to-end Domain Specific Languages (DSL) experience. He is highly experienced in architecture level facet security and commercial application security, and has previously held various architecture and technical leadership positions at Cisco and Hewlett-Packard.
The views and opinions expressed in this blog post are solely those of the author(s) and do not necessarily reflect the opinions of IoT Business News.
Tags:IoT security
Previous : Gemalto selected to supply its On-Demand Connectivity solution to Bridge Alliance
Next : GSMA: Low Power Wide Area Networks to Lead IoT Connections by 2022