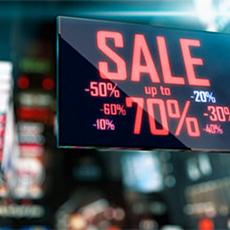 According to a new research report from Berg Insight, global shipments of connected digital signage displays are estimated to have grown by 19.7 percent to 10.5 million units in 2016.

Market growth is driven by greater demand for digital signage solutions in all market verticals, technological advancements and a continued decline in prices.

The digital signage industry is highly fragmented with a large number of companies active in the marketplace. As for other fragmented markets, consolidation is increasingly taking place among the industry vendors as the market matures, and the digital signage space has seen a large number of M&As over the past years involving various companies directly and indirectly active in this industry.
“The most significant deal on the digital signage market in the past few years is STRATACACHE’s acquisition of Scala in 2016 which contributes to a broad global footprint and total revenues expected to surpass the billion dollar mark in the near-term”, said Rickard Andersson, Senior Analyst, Berg Insight. 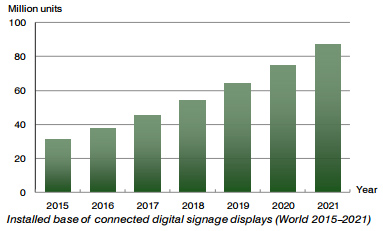 STRATACACHE has over the years done multiple acquisitions in the digital signage space and related fields, and the most recent example is Real Digital Media which was acquired in early 2017. “While the consolidation trend contributes to limiting the number of participants in the market place, there is also a continuous inflow of new players including start-ups eyeing the digital signage industry”, continued Mr. Andersson. He adds that one area where new companies will likely continue to emerge is new IoT software solutions for digital signage.

“There are promising opportunities in this space for software solutions that make it easier to integrate various data sources and marketing channels with digital signage systems.”