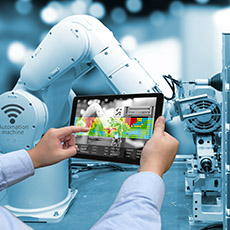 PTC today announced several new initiatives that advance its Industrie 4.0 strategy and will enable manufacturers to unlock value from the physical-digital convergence and transform their operational systems.

These include a collaboration with McKinsey & Company; strategic Industrie 4.0 work with acatech, the German national academy of science and engineering; and the upcoming release of connected operations applications built on the ThingWorx® IoT platform.

PTC works with hundreds of global manufacturers worldwide to support and advance their Industrie 4.0 strategies.
The new PTC Industrie 4.0 initiatives include:

Often referred to as the fourth industrial revolution, Industrie 4.0 is the transformation of manufacturing through the adoption of smart, connected products and smart, connected operations. Industrie 4.0 makes use of major innovations in digital technology, such as edge and big data analytics, advanced networking, communications and security, robotics, artificial intelligence, additive manufacturing, augmented reality, mobile, rapid application development, and the Internet of Things. When combined, these technologies bring together the physical and digital worlds, enabling manufacturers to gain deep, real-time insight into their operations – and subsequently to increase efficiencies and flexibility, lower costs, and improve product quality.

Known collectively as Industrie 4.0, the concept is now worldwide in scope. It is also the blueprint for Made in China 2025 and heavily influences Smart Manufacturing initiatives in the United States. While it is most often associated with manufacturing, adjacent market segments, including utilities, smart cities, oil and gas, and healthcare, have begun to embrace Industrie 4.0 principles and technologies.

“Our upcoming release of connected operations applications combined with the acatech Industrie 4.0 Maturity Index and our strategic collaborations with industry leaders such as McKinsey & Company will enable our customers to realize value from their Industrie 4.0 initiatives.”

“LNS Research has long advocated that Industrie 4.0 requires the deployment of next-gen manufacturing apps that are lightweight, flexible, modular, and run on top of IIoT Platforms. Since the launch of ThingWorx, PTC has established itself as a leading provider that shares this vision with a successful track record of helping manufacturers around the world,” said Mathew Littlefield, founder and president, LNS Research. “These new initiatives – the collaboration with McKinsey, the research with acatech, and the upcoming release of connected operations offerings, will further enhance the company’s position, as well as accelerate Industrie 4.0 adoption.”

The timing of any product or application release, including any features or functionality, is subject to change at PTC’s discretion.