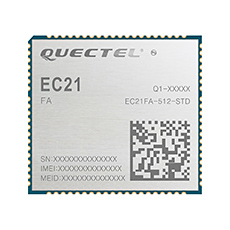 Quectel Wireless Solutions, a leading global supplier of Internet of Things (IoT) modules, has recently received certification of its LTE Cat 1 EC21-VD module from Verizon, one of America’s largest carriers.

In the certification letter sent to Quectel, Verizon said Quectel’s EC21-VD has been approved through the Open Development certification process for use on Verizon Wireless network.

“this means our EC21-VD module is reliable, well tested and proven in its capabilities for operating on Verizon’s LTE network. Now our customers can accelerate their IoT deployments in North America based on Quectel Cat 1 module.”

The Verizon-certified module was developed based upon Qualcomm’s MDM9x07 modem, and supports worldwide coverage of LTE and UMTS/HSPA+ networks. It is compatible with Quectel’s 3G module UC20, as well as multi-mode LTE EC20/EC25 in unified form factor. It is also backward compatible with existing EDGE and GSM/GPRS networks, ensuring that customers can easily migrate from LTE to 2G/3G networks.

EC21-VD features cost-effective, low power LTE connectivity, and delivers speeds of 10Mbps downlink and 5Mbps uplink. These make EC21-VD an ideal solution for IoT/M2M applications that are not reliant on full LTE speeds or huge bandwidth, but require the longevity and reliability of LTE networks, such as security, fleet management, asset tracking and smart metering.

Quectel’s EC21 Series contain 10 variants which can cover the networks of most mainstream carriers around the globe. EC21-A, another Cat 1 variant designed for the North American market, has earned AT&T certification in August this year.