Bsquare’s 2017 Annual IIoT Maturity Study reveals 86 percent of industrial organizations have adopted IoT but fewer than half are using advanced analytics and only a quarter have taken steps to automate the application of insights.

Bsquare, a provider of Industrial Internet of Things (IIoT) solutions, today released the findings from its first annual IIoT Maturity Study, which explores the current IoT adoption progress of business buyers in Manufacturing, Transportation, and Oil and Gas (O&G).

According to the 2017 study, 86 percent of industrial organizations are currently adopting IoT solutions and 84 percent believe those solutions are very or extremely effective. In addition, 95 percent believe that IoT has a significant or tremendous impact on their industry. However, the study also shows that most IIoT investments are focused on connectivity (78 percent) and data visualization (83 percent). In addition, only 48 percent are doing advanced analytics on that data and only a small number (28 percent) are automating the application of insights derived from analytics.

“Our study shows that while industrial organizations have enthusiastically adopted IIoT, a majority have not yet moved to more advanced analytics-driven orchestration of data insights.”

“These later stages of IIoT maturity—analytics, orchestration and true edge computing—tend to be where most of the ROI is realized. This is especially important because, according to our study, the number one reason cited for IIoT adoption is cost reduction.”

Bsquare’s 2017 Annual IIoT Maturity Study was conducted in the United States in August 2017, and reached more than 300 respondents at companies with annual revenues in excess of $250 million. Participants were evenly divided among three industry groups (Manufacturing, Transportation, and O&G) and titles covered a wide spectrum of senior-level personnel with operational responsibilities, most of whom had spent an average of six years in their organizations.

Key highlights from the report include:

The IoT Maturity Index outlines the stages commonly associated with Industrial IoT technology adoption. Each phase typically builds on the previous one, allowing organizations to drive maximum value as they progress through the index. The stages include:
1. Device Connectivity : on-board logic to collect data and transmit to cloud databases,
2. Data Monitoring : dashboard and visualization tools to monitor real-time data,
3. Data Analytics : machine learning and complex analytics used to develop device models and insight,
4. Automation : development and execution of logic rules that automate business activities and device configuration,
5. Edge Computing : distribution of analytics and orchestration to the device level.

For more information on the 2017 Annual IIoT Maturity Study,
click on the illustration here-below to download the complete survey infographics: 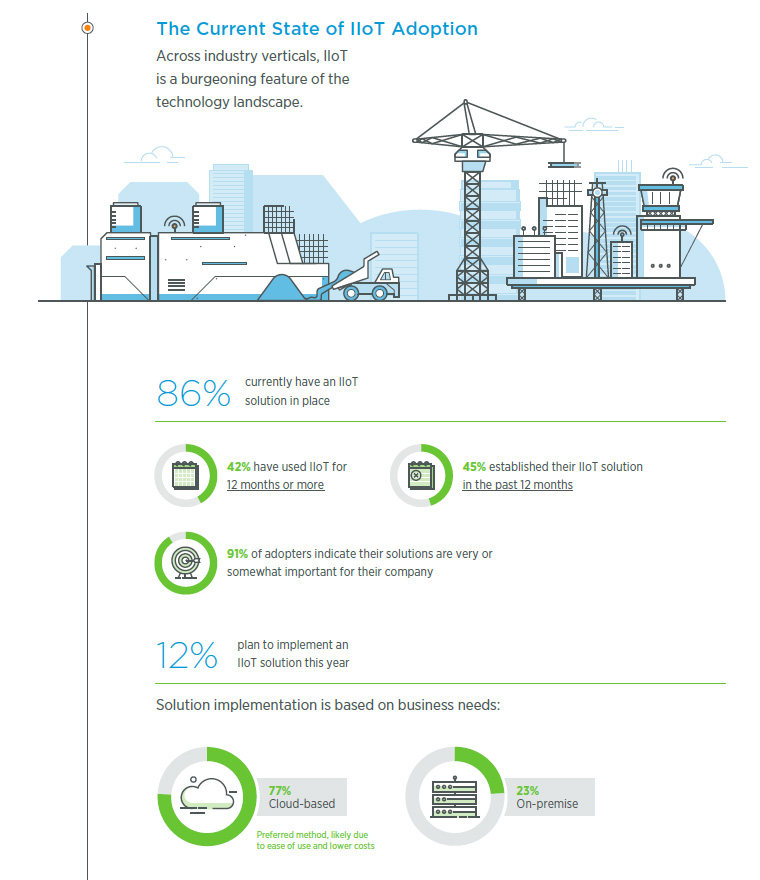