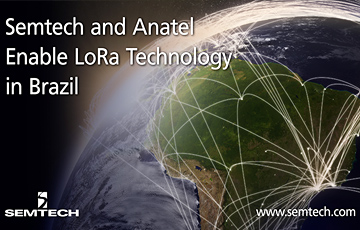 The implementation of LoRa Technology and LoRaWAN will enhance IoT applications in South America.

According to Frost and Sullivan, by 2021, the Internet of Things (IoT) market for applications and hardware is set to generate $3.29 billion in Brazil. To support this rapid IoT growth, Brazil needs a strong, flexible infrastructure.

Anatel reviewed comprehensive studies performed by two government agencies: The Department of Certifications and Numbering and the Department of Spectrum, Orbit and Broadcasting. In addition, Anatel collaborated with equipment manufacturers and held public hearings prior to its passage of resolution #14448 on December 4, 2017. The resolution provides international certification of devices that operate using chirp spread spectrum (CSS) modulation and low duty cycle such as LoRa Technology.

“This update is a very important milestone for Brazil and will expand the use of IoT across several vertical markets.”

“The resolution ensures technological neutrality and provides a modern regulatory framework for the wide dissemination of applications that will enhance productivity and make people’s lives better.”

“The recent actions taken by the telecommunications regulatory agency for the largest country in Latin America has facilitated the immediate rollout of a LoRaWAN™ network in Brazil and, likely, the continent,” said Marc Pegulu, Vice President and General Manager of Semtech’s Wireless and Sensing Products Group at Semtech. “Citizens of the eighth largest economy in the world will soon benefit from low power wide area networks (LPWANs) powered by Semtech’s LoRa Technology in a variety of exciting applications, including cities, building, supply chain and logistics, agriculture, and metering.”