According to the latest research from Strategy Analytics, IoT Cellular Device Sales will undergo a transition with 5G, the dominant air interface, in 2025, as published by Strategy Analytics IoT Strategies service.

Strong growth from projects in China has continued to provide a healthy impetus to the IoT device market.

Strategy Analytics forecasts that shipments of 4G IoT modules will peak within three years, as 5G modules begin slowly in 2019, with 2023 a key inflection point, as 5G modules outstrip those of 4G modules. The Automotive vertical market will be the largest consumer of IoT cellular modules across the forecast period and will significantly increase its market share position by 2025.

“The low latency benefits of 5G will allow IoT use cases where near-instantaneous communications are required, such as platooning of trucks, autonomous driving, low latency and QoS in manufacturing and areas like remote surgery in healthcare.”

“5G for IoT becomes really interesting when we move to standalone (SA) 5G network deployments (initial networks will be NSA (non-standalone), namely 5G built onto LTE networks. With the ability to offer network slices based on customer requirements and with eMTC and NB IoT standards also folding into the second phase of 3GPP Release 16, in tandem with 5G NR (New Radio), it is clear that 5G will be able to service a broad range of IoT needs over the forecast period.”

Guang Yang, Director in the Service Provider Group at Strategy Analytics, added:
“We do not expect to see any slowing in Chinese growth as it leads the way in the Asia Pacific region. In addition to state investment in manufacturing, including smart appliances and high-end consumer electronics, the Chinese government is also promoting the development of the IoT in areas such as industrial control, energy, financial services, and healthcare. Funding is also being provided to municipalities and economic development zones as part of official “smart city” pilot projects, which are looking to use IoT applications to address major urban issues, such as congestion and pollution.” 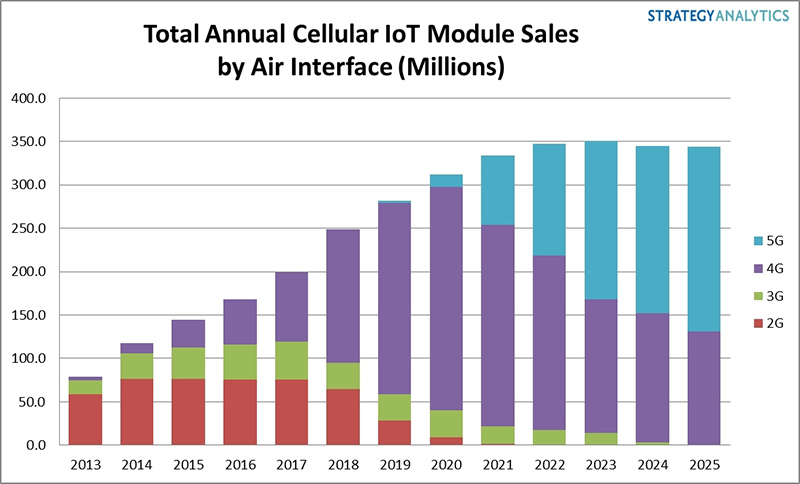